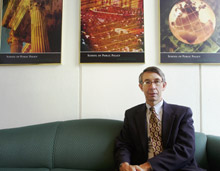 With the labor market seemingly getting tighter by the day in Northern Virginia, employers are reaching deeper into their pockets to attract and retain their workers.

Average weekly wages were among the nation’s highest in in Fairfax and Loudoun Counties at the end of 2006, according to a study released this week by the U.S. Bureau of Labor Statistics.

“Over-the-year employment advances in the Washington metropolitan area extend back to July 2002 without interruption,” said Sheila Watkins, the BLS’ regional commissioner. “This was the 58th consecutive increase in local payrolls for this area.”

Elsewhere in Greater Washington, among large U.S. counties, D.C. had the nation’s sixth-highest average weekly wage, at $1,424, followed by seventh-ranked Arlington County at $1,419.

The average weekly wage among large counties in the U.S. was $861 at the end of 2006. Prince William County’s fell below that, at $766, according to the BLS report. The nation’s highest wages?  New York City, of course, with an average weekly wage of $1,781.

Job growth nation’s 4th highest
After a huge stall in job creation after the 9/11 terrorist attacks, the BLS also reported that the area’s job growth continued to rise faster than the rest of the country, by almost a half percent. Indeed, the area ranked fourth in the country for job growth.

“The good news is that the Washington metropolitan area is still generating net new jobs at an above-projected rate,” said Dr. Stephen S. Fuller, the Dwight Schar Faculty Chair at George Mason University’s Center for Regional Analysis.  “The bad news is that the scarcity of qualified workers may be constraining the regions growth.”

Fuller said that with job growth exceeding the availability of resident workers and unemployment remaining at near record low levels, the economy is increasingly dependent on non-residents to fill its new jobs.

From April 2006 to April 2007, some 53,600 new jobs were created in the region, the BLS reported last week. Total nonfarm employment for the area, which includes Northern Virginia and suburban Maryland, as well as DC and parts of West Virginia, stood at 3,006,700 in April 2007, up 1.8 percent over the year.

Growth was widespread among industry sectors.

The only slump appeared to be in the information and manufacturing sectors, which both lost close to 1,000 jobs from April 2006, the BLS said.

Despite the BLS’ rosy numbers, Fuller said the area’s economy, which registered its strongest growth rate in 2004, has actually continued to slow each year since, with this trend continuing into 2007.  “This slowdown has been particularly evident when a sharp rise in energy prices and decrease in consumer confidence undermined the expansion,” Fuller said. “These negative conditions have contributed to a moderation in consumer spending. Still, the one important positive indicator of the local economys underlying strength is its strong job growth.”

Fuller says the cost and availability of housing compounds this problem.  “This is not the first time that the consequences of an economic expansion have led to its slowdown,” he said, recalling that a tight labor market and rising housing prices in 1999 and 2000 generated labor shortages and fueled wage inflation.  “These same conditions exist today and can be expected to dampen the economys growth over the remainder of this business cycle.”

The 50% increase in gasoline prices this year and the slowdown in new residential construction have sapped the strength of the local economy just as these two conditions have been a drag on the national economy during the first half of 2007.  “As a result, we see the housing market recovery extending into 2008,” he said.

Fuller’s near-term outlook
With the regions principal economic driverfederal spendingno longer growing sufficiently fast enough to off set the economys under-performing sectors, the performance of the areas economy over the remainder of the year will be determined by the speed at which the housing market equalizes, Fuller predicted. “The Leading Index has been treading water for the last year and is not providing a strong signal that growth will accelerate any time soon,” he said.

And, as the housing market normalizes and gasoline prices decrease as the summer winds down, the economys underlying strength will drive it higher over the second half of the year setting up a stronger outlook for 2008, he predicted.

“The Washington area economy is fundamentally strong and resilient,” he concluded. “With its federal spending base, job growth and increasing incomes, the local economy will outlast these short-term threats.”