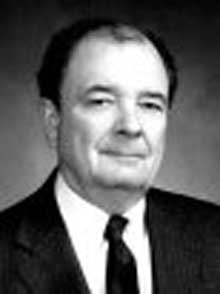 Del. Vincent F. Callahan Jr. (R-McLean), one of Virginia’s longest-serving members of the General Assembly and chairman of the powerful state House Appropriations Committee, spent his last day as a Virginia lawmaker Wednesday, after confirming he will not run for another term this year.

Callahan, 75, of McLean, who was first elected to his seat in 1967, declined to reveal his reasons for not running for another two-year term. He said he will formally announce his decision next week.

“Fairfax is going to lose its single most significant member in the Assembly leadership,” State Sen. Ken Cuccinelli (R-37th) said. “I’ve come to respect and look to Vince as a leader.”

It was not immediately apparent who might step forward from Republican ranks to vie for Callahan’s seat, but at least two Democrats, attorney Richard Sullivan and community activist Margaret Vanderhye, both of McLean, have announced their intention to seek their party’s nomination in the June primary. Both have been especially critical of Callahan’s record on transportation.

Callahan’s decision not to run comes on the heels of a particularly bruising legislative session in Richmond during which transportation funding legislation was passed only in the final hours after weeks of political warfare.

“He [Callahan] has been there [in the Assembly] a long time,” Cuccinelli said. “I’ve been there five years, and it seems like a long time.”

Dranesville District Supervisor Joan DuBois (R) said Monday, “This community will not realize for many years the positive benefits that it has reaped during Vince Callahan’s 40-year tenure in the Virginia legislature.”

DuBois, who termed Callahan a personal friend, detailed many of his contributions to the district, calling him, “a gentleman of the ‘old school’ who knew that partisanship had no place in efforts to improve his community.”

A retired editor and publisher, Callahan is a native of Washington, D.C. He is a graduate of Georgetown University, where he earned a bachelor’s of science degree in foreign service; he attended graduate school at American University.

After the death of his wife, Dot, in 2005, Callahan married his second wife, Yvonne Weight. He has five children from his first marriage.

TURNING A PAGE — a slideshow retrospective on Vince Callahan
http://www.timespapers.com/slideshows/Callahan/