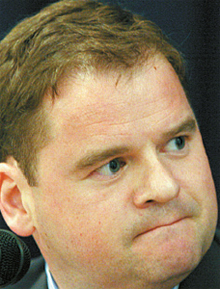 Alexandria Democrats will hold a caucus June 9 to choose their candidate to fill the City Council seat left vacant when Andrew Macdonald resigned. Before that though, the public got an opportunity to hear candidates views on the issues that are important to them.

The five candidates responded to two questions that were provided to them in advance, questions from each other and questions from the audience. There were no fireworks but differences were clear.

Jim Lay would delete money for rebuilding the Charles Houston Recreation Center and keep money for raising teacher salaries and benefits. We need to spend our money on people, not on bricks and mortar, Lay said.

Boyd Walker would not fund the proposed All City Sports Facility and keep money for an environmental study to make Alexandria a green city.

Justin Wilson would defer some capital projects and fund schools. Its time to stop talking about things such as the superintendents performance and focus on student achievement. I would give the School Board sufficient funds to improve student achievement, Wilson said.

Mark Feldheim would delete some money for taking advantage of National Harbor. Not that I dont think National Harbor is important, but we have more pressing needs in the city, Feldheim said.

Lenny Harris would focus spending on public housing. We need to make sure that every Alexandrian has a safe place to live, he said.

Commitments
All of the candidates committed to support the Partys nominee after the caucus. Each expressed support for the public school system and historic preservation. Walker pledged to close the Mirant Potomac River power plant; to close Virginia Paving and to support no connector between Duke Street and Eisenhower Ave. Lays message throughout the evening was teacher pay and benefits. Wilson expressed his concern about the lack of athletic fields where children can play which will help keep them out of trouble. He also spoke of fiscal responsibility and working with the School Board to develop a better budget process that would bring the schools in line with the citys new, more transparent budget process. Harris wants to bring Alexandrians together and achieve the mayors concept of One Alexandria in reality. Feldheim spoke about citizen involvement in government, historic preservation and fiscal responsibility. The citys new budget process is better than it has been, but there is still room for improvement, he said.

Details
Democrats can vote on Thursday, June 7, from 7 to 9 p.m. at Alexandria Democratic Committee headquarters or from noon to 10 p.m. on Saturday, June 9, at Minnie Howard School. Those who vote must sign a pledge that they will support the Partys candidate in the upcoming special election.