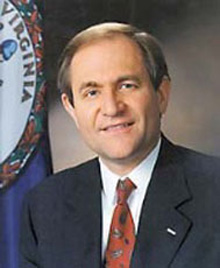 Former Virginia Gov. Jim Gilmore (R)  has withdrawn his candidacy for the Republican nomination for President, citing a late start and the front-loaded nature of the primary schedule.

Gilmore, 58, lives in Richmond and Old Town Alexandria, from where he commutes to a job  in downtown DC at a corporate law firm. He became the first major GOP candidate to leave the race.

“Today, I am today withdrawing my candidacy for the Republican nomination for President,” Gilmore told supporters Saturday.  “It has been a positive and rewarding experience for me, for my family, and for my supporters.”

Gilmore, who served as Governor of Virginia from 1998 to 2002, said in a statement it had become “impractical”  to continue to pursue “this path towards further public service, but that he would be “actively looking” for other opportunities to continue his public service in the state. Specifically, he said he intended to remain active in the Republican Party and in the public debate, and would be forming a state political action committee to assist Republican candidates in the General Assembly.

“I am proud of the fact that my campaign focused on the issues, worked hard to block amnesty for illegal immigrants, brought attention to the need to protect private property rights, and called for a new path in Iraq that would provide our valiant military men and women with a more clearly defined and achievable mission,” Gimore added.

Gilmore said he had come to believe that it takes more than a positive vision for the nation’s future to successfully compete for the Presidency.  “I believe that it takes years of preparation to put in place both the political and financial infrastructure to contest what now amounts to a one-day national primary in February,” he said.