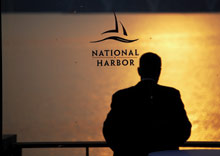 With 27 cranes rising from the dusty shoreline of the Potomac River, short of Las Vegas there is no other place in the world these days where there is a greater bee hive of building activity.

Each morning starting at 4:30 am, the first of three six-hour crews ply the future site of National Harbor with a fleet of cement trucks, heavy bulldozers and pneumatic excavators.  The tab for 3,000 construction workers runs to a daily cost of $2.5 million. They’re working seven days a week to open the $2 billion project by April 25, 2008.

And on Tuesday, developer Milt Peterson’s dream of building an Oz-like tribute to a summer vacation trip to Las Ramblas in Barcelona began to pay off:  Gaylord Hotels announced that its convention hotel and resort on the site — the largest convention hotel on the East Coast and the fourth largest in the world — had sold its one-millionth hotel night, setting a pre-opening record for any new hotel in the world. The 225 condo units which Peterson Cos. was building had also sold out in the two short months since the marketing center had opened.

“Over a decade ago my dad and I walked along the property and I said ‘What are we going to do now?'” recalls Steven B. Peterson, the president of Peterson Development, who lives in an area of Alexandria across from National Harbor, and can see the project rising from his back window. “Every month our vision would change.”

The younger Peterson was the keynote speaker Tuesday to about 150 civic and business leaders at the Alexandria Rotary Club’s weekly meeting at Belle Haven Country Club. He recalled that site develpment discussions were held with Walt Disney Co. officials about a themed amusement park, as well as with the developers of a possible LegoLand park for kids.

Eventually, his father’s summer vacation five years ago to Barcelona and its bustling Las Ramblas art deco district clinched the decision. “This is it,” the elder Peterson told The Times recently. “This is what we need to build on our site on the Potomac.”

Steven Peterson, who graduated from St. Stephens/St. Agnes School in Alexandria, told the Rotarians that his father’s vision is constantly changing. “The vision has been evolving over the last 12 years,” he said. “The market has been evolving, so this has evolved.”

Peterson called National Harbor a “lifestyle center on steriods,” with 6,000 guests per day filling up the 2,000 rooms of the centerpiece Gaylord National Resort and Convention Center, five auxiliary hotels with 500 rooms, and eventually 2,500 luxury condo units, apartments and townhomes. There will be eight marquis “destination” restaurants, live entertainment on a stage which pops out of the landscape, a nightclub part owned by Hollywood actor Ashton Kutcher, as well as luxury retailers, the announcement of which is forthcoming.

As for nearby Alexandria, the closest city to National Harbor, “The synergy we’re trying to create with Alexandria is in evolution itself,” Peterson said. However, he added, “We’re creating a one stop shop.”

That concept of “capturing” high-end shoppers and diners across the river and not delivering them to the shopping districts of Old Town, Del Ray and the West End has some Alexandria retailers fearful.

“I don’t know if the dollars will materialize, but their initial efforts have been very helpful,” said David Martin, an Old Town jeweler who’s president of the Old Town Busines and Professional Association. “The recovering economy has not delivered the kind of business we’d like. We can only hope for more.”

City Council is proposing to spend $700,000 to spruce up the city’s public spaces and to provide better signage and perhaps even trolleys, something which City Council candidate Bill Cleveland, who was defeated Tuesday, had opposed. “Our businesses are really hurting,” said Elizabeth Stone, a gallery owner on King Street. “The more the city can do to welcome these shoppers, I think the better off we’ll be.”

Peterson Co. officials remain optimistic there will be plenty of “spillover dollars” for everyone. “We want to make this project a uniter, not a divider,” said Kent S. Digby, the vice president of National Harbor operations. “The excitement of Steven and Milt is infectious.”

Steven Peterson agrees. “My father has poured his heart and soul into this property,” he said. “Every morning my father would come in with another idea. But we as a company have never done anything on this scale, and we will not get a return on this property for 6-7 years.”