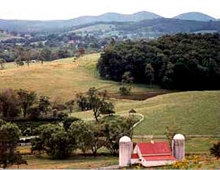 The numbers boggle the mind.

“That means about every three and a half years an area of the size of Prince William County is developed,” David Phemister, The Nature Conservancy’s director of government relations, told the Times Community Newspapers editorial board recently.

Despite the sluggish new-home market, which most observers consider temporary, there appears no discernible end in sight to the pace at which growth consumes land in the commonwealth.

With the clock ticking, the global organization believes the state quickly must step in and commit massive amounts of money to protect valuable farmland and forest.

Phemister and Ridge Schuyler, who directs the conservancy’s Piedmont program, gave a 90-minute an overview of the Arlington-based organization’s, goals, objectives and accomplishments at the Times Democrat office at 39 Culpeper St., Warrenton.

“The encroachment of people on the natural environment is becoming greater and greater, which is why we need to identify the last great places and try to protect them before they’ve swamped with us,” Schuyler said.

Established in 1951 in Washington, D.C., the conservancy’s mission “is to preserve the plants, animals and natural communities that represent the diversity of life on Earth by protecting the lands and waters they need to survive.”

A conservancy map of Virginia shows a series of green “blobs” that identify “the last, best examples of forests” the organization wants to protect.

It estimates that tree canopy in the Washington metropolitan area alone has decreased by almost 70 percent in the past 30 years. Trees play a critical ecological role, taking in CO2 and releasing oxygen, enhancing water quality and providing shade to help cool temperatures.

The map shows large swaths of forest across the state that the conservancy plans to protect.

Phemister declined to guess how many acres the graphic depicted.

But Schuyler said the organization targets areas for protection of at least 15,000 acres because they are of “sufficient size to provide functional habitat for a wide variety of species.”

Much must be done to protect those “blobs,” Phemister and Schuyler said.
To illustrate their point, they cited the Watery Mountains Forest block west of Warrenton.

Through a 1961 land donation, the Arundel family, which owns Times Community Newspapers, established the conservancy’s first preserve in Virginia.

Today, Wildcat Mountain Preserve comprises 891 acres of the estimated 16,000-acre Watery Mountains Forest. To date, about 4,000 acres, or 25 percent of the forest block, are under conservation easements.

Many of the conservancy’s priority areas around the state contain “common” and sometimes “rare” species. “The common,” Schuyler said, “could become uncommon very quickly if you take the eye off the ball.”

His job “is to protect about three million acres of land” in the Piedmont, he said, adding with a laugh, “I’m not quite there yet.” The conservancy holds conservation easement on about 23,000 acres in the region.

The Virginia Outdoors Foundation, a quasi-state government agency, holds easements on more than 400,000 acres statewide. Fauquier has more land under easement (in excess of 77,000 acres) than any other county in the commonwealth.

Besides the Watery Mountains Forest block, key conservancy projects in the region include the Fraser Preserve, Great Falls National Park and Occoquan Regional Park, all in Fairfax County.

The conservancy believes the solution to protecting priority land and natural resources requires a significant increase in state government spending.

It supports “more targeted and direct land acquisition” and, when appropriate, the purchase of easements.

Virginia can and should do a better job of investing in conservation, according to Phemister.

He underscored the “simple disparity” between the amount Virginia has spent in recent years compared with neighboring Maryland and North Carolina (see graphic).

For example, in 2006, Maryland spent about $300 million and North Carolina spent just under $150 million on land conservation, Phemister noted.

By contrast, Virginia spent only $4.4 million that year. In 2007, the commonwealth doubled its land-conservation commitment to $8.8 million , including $4.25 million in matching grants for local governments with certified purchase of development rights programs (PDR), he said.

Under PDR programs, local government pays qualified landowners a fixed fee per potential development right. In exchange, landowners agree to put a conservation easement of the affected land, permanently protecting it from further subdivision. They also get to keep their land and can use PDR money as they wish.

The conservancy believes Virginia must set up a dedicated revenue system to support land conservation, Phemister said. Maryland, for example, commits land-transfer tax revenue to support its conservation efforts. Virginia could do likewise, he suggested.

It’s important to remove the debate over conservation funding from the ongoing and sometimes precarious budget appropriations process, Pheminster argued.
Phemister praised Virginia’s program to give tax benefits to those who put easements on their land. But the “market-based” program doesn’t allow the conservancy, other groups or the state to “target strategic” property.

The conservancy wants the Virginia General Assembly to radically increase funding for land conservation next year. Its request to lawmakers “would be far to the north of $8.8 million,” Phemister said in an interview. (He declined to be more specific.)

But in the past, the organization has advocated $50 million annually to support the state’s PDR program and $50 million for the Virginia Land Conservation Foundation. (The General Assembly created the foundation in 1999. The foundation has spent $21 million to protect more than 20,000 acres.)

That level of state investment would be “extremely wonderful,” Phemister said. Still, he knows better than to hold his breath.

Lawmakers understand the importance of land conservation, but, “so far we haven’t seen that recognition translate into the sort of funding levels that would really start to make a difference on the ground,” Phemister said.