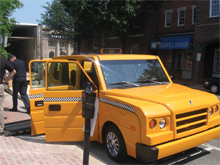 The new Standard Taxi prototype was big, boxy and bold, as it rolled out of the tractor trailer on King Street May 31, possibly coming to meet Alexandrias taxi requirements for years to come.

A crowd gathered as Marc Klein, president of The Vehicle Production Group at Standard Taxi in Northbrook, Ill., touted the advantages of the car. It looked like a cross between a Hummer and a Honda Element minivan, but built with taxi drivers and passengers in mind.

In our car, you have an extraordinary amount of leg room, Klein said. In addition to the leg room, it has a huge trunk, spacious seats, a drives cockpit, room for a wheelchair, and a wheelchair accessible ramp as well. While it looks like a car, its a piece of equipment, Klein added.

The Alexandria Yellow Cab Company is interested in the Standard Taxi as a replacement to their aging fleet of cabs and also because it was made to be a cab and nothing more.

In 2005, the city passed a law that all cabs operating in Alexandria cannot be more than eight years old. In addition, the city wants to increase the number of wheelchair accessible cabs, and the Standard Taxi may be the solution.
Hopefully well be seeing a lot more of these, said Tom Culpepper, Alexandrias deputy director of transportation.

Lots of room
The Standard Taxi can seat 5, or 4 and a wheelchair. It is over 16 feet long, 6.5 feet wide and 6 feet tall. The turning radius is 36 feet and easily made a u-turn in front of Market Square. The gas tank can hold 20 gallons and the prototype was outfitted with a General Motors 4.3 liter, V-6 engine that gets 12-15 miles per gallon. Klein said the engine will be outfitted to run on gasoline, liquid propane gas or compressed natural gas and a hybrid engine is in the works.

The price tag is in the $25,000 range, which is the same as the sticker price of a Ford Crown Victoria, the common car for many cab drivers, although some buy used Crown Vics. The Standard Taxi does have a completely outfitted drivers seat enclosed in safety glass, which is a requirement in New York City and Chicago.

With the country facing a growing senior population with possibly more wheelchairs in the future, Klein noted that his taxi is compliant with the Americans with Disabilities Act.

Abdullah Sakhi drives a cab for Alexandria King Cab Company, and his is a Mercury Grand Marquis. He sat across the street eying the new car and noted that it looked expensive until he heard the price. Its not bad, $25,000, he said. Sakhi paid $17,000 for his car but then you have to add everything, that taxis have, he said. Sakhis cab is not outfitted to take wheelchair passengers, nor did it have a Plexiglas partition.

Alexandria Yellow Cab driver Edna Mehrete has been driving for 33 years. She leafed through the Standard Taxi brochure she received from her company. Mehretes taxi van is not wheelchair accessible and the citys age limit on cabs is a factor she considers. Would I buy it? Yes. Im thinking hybrid next time I buy, she said.

So far, six prototype Standard Taxis have been built and talks are continuing with a number of big city markets, but Klein did not divulge any further information on purchases. That is confidential, he said. We have interests from every major city. This particular vehicle was a $2 million prototype and the company expects to roll more vehicles off the assembly line in 18 months.