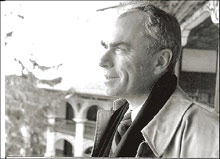 Dana R. Bullen, a reporter and editor at The Washington Star for 21 years before leading a group that advocates for a free press around the world, died of cancer June 25 in Alexandria. He was 75.

Bullen worked at the Star covering the Supreme Court, Senate and the 1968 presidential campaign. He was foreign editor of the Star when it folded in 1981 and wrote a weekly, syndicated column on constitutional law. He was a Nieman Fellow at Harvard University in 1966-67.

During his two decades at The Star, Bullen was the paper’s U.S. Supreme Court reporter, U.S. Senate reporter, covered the 1968 presidential campaign, wrote a weekly syndicated column on constitutional law and was an assistant news editor.

“He was a wonderful man,” said John Hynan, a longtime friend who lives in Old Town. “He was an experienced and dedicated newspaperman, and the first attorney to cover the Supreme Court for a newspaper.”

In 1980, on a years leave as journalist-in-residence at Tufts Universitys Fletcher School of Law and Diplomacy, Bullen initially volunteered with the World Press Freedom Committee, representing the organization at four major international conferences, including a landmark UNESCO meeting in Paris considering licensing of journalists in the name of protecting them.

After confrontational sessions, the restrictive proposal was set aside. I was outraged at what some groups were trying to do, and it made me realize what needed to be done, Bullen later said.

After the Star closed in 1981, Bullen became executive director of the World Press Freedom Committee, representing the group at the United Nations. He also organized international meetings about issues concerning a free press, such as how to support emerging independent news organizations in Eastern Europe following the Soviet Union’s collapse.

On any list of dedicated, articulate, persistent and effective defenders of freedom of the press, Dana ranked among the very best, said Harold W. Andersen, retired publisher of the Omaha World-Herald, former chairman of the American Newspaper Publishers Association. Wherever men believe that a free press means a free people, Dana Bullen will be remembered.

Dana Ripley Bullen II was born in Boston, Mass., on Aug. 6, 1931. He attended Phillips Academy, Andover, Mass., and earned journalism and law degrees at the University of Florida. Following active duty as a lieutenant in the U.S. Marine Corps, he came to the Washington area in 1958, joining The Star the next year after working for a suburban paper.

Bullen retired as WPFC executive director in 1996, but remained an adviser to the group for a further 10 years during which press freedom on the Internet became a major concern. Among citations, Bullen twice received the American Bar Association’s Silver Gavel Award for his coverage of the Supreme Court and the law, and in 2000 was awarded the Inter American Press Association’s Chapultepec Grand Prize in recognition of his work for press freedom.

Survivors include his wife, Joyce Cornell Bullen of Alexandria; a brother, Pierce K. Bullen, of Washington, D.C., a niece and three nephews. Contributions may be made in his name to World Press Freedom Committee, 11690-C Sunrise Valley Drive, Reston, VA 20191.