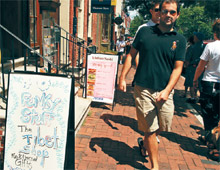 The sidewalks along King Street have become a gray area when it comes to doing business. Businesses put signage out there to bring in customers from the sidewalks, but for second floor businesses or those that are off the street front, sandwich boards are illegal; yet those rules leave some room for flexibility, especially on the weekends.

The zoning ordinance, Section 9-102, defines portable signs as any sign which is not permanently affixed into the ground or to a building or structure and which can be easily picked up and moved to another location.

Those portable signs, or sandwich boards, are prohibited in Section 9-104(H), which states no such signs may be erected or displayed. Some businesses get around that rule by putting the signs up early on Saturday and taking them down on Sunday night, but this is still against the rules, said Tom Fairchild, the citys business facilitator. Its a code that exists all the time, the sidewalks are a public right of way, Fairchild said. Its a safety issue, its a clutter issue.

The rule applies to chalkboards displaying the daily specials or plants and garden gnomes from all the flower shops on King Street. Peggy Kleysteuber, owner of Cash Grocer Natural Foods, heard from the city before for a chalkboard displaying specials. They warned me, she said. Kleysteuber understands the rules, and feels it could get out of hand if they allowed advertisements like that, but feels a compromise is in order. Businesses on the second story of storefronts, or back on the side streets off of King Street, depend on foot traffic. Rather than being a city of no they need to be a city of lets see how to make this work, she said.

Alternatives?
David Martin, the president of the Old Town Business and Professional Association, has been looking at alternatives to sandwich boards, including elevated signs made of bronze or wood. There are other cities that have done this successfully and tastefully. He wants to work with the city, modifying the rules so everyone is happy. Were all in this together, better business and a better city, Martin said.

Then there are the garden and flower stores. Out in front of one store in the 800 block of King, the plants, cement statues and flowers extend about two feet from the building front, blocking the sidewalk to some extent. It would count as the same kind of issue. You cant simply put your wares out there, Fairchild said.

At the same time, the city passed an ordinance allowing outside dining on the sidewalks, which take up a lot of the walking space as well. On just about every block from the water to the Metro station, there are outside dining areas that are fenced off, and it makes for a crowded sidewalk on a typical weekend day. Throw in strollers and wheelchairs, and its kind of hard to maneuver, said Del Ray resident Vivian Greblo who occassionally walks on the streets of Old Town. There is a fine line between safety and appeal, though. Thats what draws people here, she said. If you start regulating everything, it loses the charm, Greblo said.