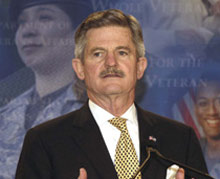 Addressing a special mental health forum with the top clinicians and researchers from the Department of Veterans Affairs (VA),  Nicholson announced plans to begin locating some of the Departments mental health programs closer to places where primary care is provided.

Given the reluctance of some veterans to talk about emotional problems, increasing our mental health presence in primary care settings will give veterans a familiar venue in which to receive care — without actually going to an identified mental health clinic, he said.

Nicholson described VA as a long-standing leader in mental health, with $3 billion devoted this year to mental health services.  The Department has the nations largest mental health program and is internationally recognized for research and treatment for post-traumatic stress disorder (PTSD).

The wounds of war are not always the result of explosions and rocket fire, he added. They can sometimes be unseen and cloaked in silence.  If left untreated, they can be just as lethal.

The war’s stress has clearly taken its  toll on veterans’ families in Alexandria.

When Liz Frederick’s fiance returned from combat in Iraq last year, he locked himself in a motel room for three days, turned out the lights and spent three days drinking,  mostly hard alcohol.  When the 27-year-old Marine corporal emerged, “he had a difficult time associating with his friends,” recalled the 23-year-old grad student in public policy, who lives in Crystal City. He’d walk down the street, a car would pull into a parking spot and he’d jump, afraid it was going to explode.

Wendra Chambers of Old Town, the wife of an active-duty Army captain who served two tours of Iraq, said other combat veterans have had similarly jarring reunions. After one vet returned home recently, she said, his wife decided to take him for an upbeat trip to the mall.  While shopping, the decorated vet spent much of the time staking out possible hiding spots for imaginary al Qaeda operatives.

“We all get traumatized seeing our friends and loved ones going through a living, breathing hell,” Chambers said. “For us, it’s a little bit too real.”

These are the words of families whose loved ones have been at war and bring home violent memories etched deeply into their DNA. These are memories which most would rather soon forget: The sound of bullets whizzing by, of mortars piercing the nighttime air, of IED’s discovered on Iraq’s dusty backroads. The horror of one exploding under a Humvee, flames all around, engulfing the desert landscape.

Some of these soldiers never return to their loved ones, three from Alexandria and 3,590 others to be exact, but those who do come home bring broken limbs and scarred mental health issues.

Known during the Civil War as “a soldier’s heart,” the medical terminology for the severe psychological consequences of a highly traumatic war experience is known as “post traumatic stress syndrome,” or PTSD, and symptoms include difficulty sleeping, loss of appetite, irritability, memory loss, excessive startle response, clinical depression and anxiety. Physicians say that acute PTSD subsides after three months, but if the symptoms persist, the diagnosis is changed to chronic PTSD. The Veterans Administration estimates treatment of PTSD-afflicted combat veterans may cause billions in dollars of treatment in coming years.

“We’ve added additional counselors, suicide hotlines and are spending to higher levels on mental health,” said Terry Jemison, a local spokesman for the Veterans Administration. “It’s a major concern for the VA.”

Finding a productive place in a changed world has proven difficult for soldiers returning to Alexandria with PTSD. Constant therapy, and a lot of love from their families, may improve their mental health, but some of the mental scars never go away.

“My daughter just stopped sleeping when she came home,” said Rebecca Bahr, whose 23-year-old daughter served in Fallujah, Iraq as a communications specialist in the Marines. “Some nights I’ve had her curled up in my arms, just sobbing for hours at a time.”

Like others, Bahr, who was standing vigil in front of City Hall Saturday to protest further involvement in the war, spoke to The Alexandria Times over the course of three months of interviews on the condition that their loved one’s names not be used for publication.

“My son is a soldier, not an activist,” said Fran Middleberg of Alexandria, whose son served in the Army Reserves in twin tours of Iraq and Afghanistan. “Like my son, I’ve never been more grateful to live in a democracy. I am profoundly grateful of this country’s principles. But, we just want our children to come home. This war’s hell on our children.”

Kathy Morrison of Alexandria said when her son was deployed to Iraq with other U.S. Marines shortly after the fall of Saddam Hussein’s regime, she became “permanently anxious.”

“I was absolutely in a terror zone every day,” Morrison recalled. “I never slept well. I devoured all of the newspaper reports trying to learn about every insurgent attack, every movement of American troops, every development in Baghdad, any political dialogue in the U.S.”

Morrison, who placed a big sign supporting the Marines in the front yard of her Old Town home, still wears a pin everyday with an American flag and symbol of the Marines, with a yellow ribbon behind it. “If my son were there today, trying to police an incredibly bloody sectarian civil war, I don’t know how I could bear it,” she said. “At one point I was hopeful that the outcome would be good for Iraq and the Middle East, but that hope has vanished. It is time for Congress to stop funding the war and for the troops to come home.”

Each soldier’s family interviewed is one of 100 members of the Northern Virginia chapter of Military Families Speak Out, of which Frederic is the head. “You’re trading time for lives,” she said firmly. “You can do the right thing now, or in 10 years…No one says things will be rosy if we leave, but they’re not rosy now.”

Frederick, who lobbies members of Congress “constantly” and organizes local vigils every week, said she’s received her fair share of anti-patriotic ribbing from pro-Iraq war advocates. “They ask me, ‘How could you be out here taking part in an anti-war protest? You’re supporting people who want to kill your fiance,'” she says, her voice tinged with bitterness. “I just broke down…But then I thought, how hypocritical to say we’re not patriots when we have loved ones engaged in this war, and they [mostly] do not.”

Maurice Middleberg says the perspective changes when your child is in combat. “Go get your kids to enlist and then tell me if you want these troops home,” he said. “We could have provided universal health care for 3-4 years if we had not engaged in Iraq…Instead of insuring our own people, we decided to take apart a country.”

The additions at the VA will take effect in two-thirds of the VA’s 153 medical centers, supplementing mental services already offered at the department’s 882 outpatient clinics.

Such a move will help allow the VA to begin testing all veterans from Iraq and Afghanistan for mild to moderate brain injury, an often unseen problem that can emerge months after finishing service.

A recent Pentagon study found about 38 percent of soldiers and 31 percent of Marines report psychological conditions such as brain injury and PTSD after returning from deployment. Among members of the National Guard, the figure is much higher 49 percent with numbers expected to grow because of repeated and extended deployments.

We let veterans know that mental health issues and other military-related
readjustment problems are not their fault — that we can help them — and that they can get better, he added.

Nicholson also announced plans to begin a series of regional conferences about providing mental health care to veterans with our partners at the state, local and community levels.

Recent expansion of the Departments mental health services include greater availability of telemental health programs, which treated about 20,000 patients last year; Integrating mental health services into geriatric programs; Adding psychologists and social workers to the staffs of VAs polytrauma centers;
Increasing the number of Vet Centers from 209 to 232, and adding 100 new combat veterans to run outreach programs to their former comrades.

As the newest generation of combat veterans returns home, we want to ensure that we are providing them the very best in mental health care and treatment possible.  They deserve nothing less, Nicholson said.