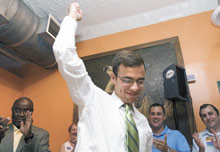 In his first bid for elected office, the 28-year old newcomer beat the highly-respected retired policeman and former five-term council member by a margin of only 347 votes of 9,190 ballots cast.

Daytime temperatures soaring above the 100-degree mark and voters on vacation kept 88% of Alexandria’s 79,000 registered voters away from the polls.

As the final tally filtered in from electronic ballot boxes at 7:35 pm, Wilson had edged out his Republican opponent by a margin of less than four percent, or 4,737 votes to Cleveland’s 4,390.

“The person who brought the extra five people to the polls, that’s what ultimately did it,” said Wilson, who may be sworn in as early as Thursday. “Every little bit mattered.”

Voter turnout was light all day at most of the city’s 27 precincts, with the Cleveland campaign deploying most of its volunteers to phone banks in a final get-out-the-vote effort.

“It’s just a shame the apathy we saw today,” said Susan B. Kellom, chair of the Alexandria Democratic Committee. “We’re gratified that in the end that people put their faith in Justin. He will do this city proud.”

Less than 11.5% of the city’s registered voters bothered to cast ballots, and as an early-day surge at known GOP-heavy precincts became evident, more than 200 Wilson campaign volunteers turned up the pressure to get Democratic loyalists to the polls. “Justin had a great organization,” said Del. Adam Ebbin (D-49). “His active, energetic team put him over the top.”

The special City Council election was held to replace former Vice Mayor Andrew H. Macdonald, who resigned abruptly in May.

Wilson, who moved to the Del Ray section of Alexandria in 2001, is an information technology systems engineer for Amtrak and has since been active in civic and City Hall affairs. He was twice elected president of the Del Ray Citizens Association and is chairman of the Alexandria Transit board of directors and a member of the city’s budget advisory committee. He raised nearly $43,000 for his succesful bid, about $10,000 less than Cleveland.

“He’s been preparing for this day since he was 10 years old,” said Leslie Tourigny, Wilson’s mother.

Tourigny, who drove from her home in Chesapeake, VA. to support her son on election night, recalled the day 18 years ago when the pint-sized politico stood at a polling station near their home in Springfield, handing out Doug Wilder and Don Beyer leaflets for most of the day. “He’s a born volunteer. He takes it to heart.”

A mass transit expert, Wilson had called for a enhanced public transportation options, a doubling of the city’s fleet of DASH buses and cleaner burning buses.  “Justin had a good message and a lot of energy,” said Mayor William D. Euille. “He ran on some issues which are really core to the growth of this city.”

Wilson’s well-wishers and exhausted volunteers turned out early to follow returns at the lively ethnic restaurant on Mt. Vernon Avenue, nursing cold sangrias and frozen margaritas, and scooping up platefuls of Tex Mex and Salvadorean food. In a new tradition, Bill Cleveland showed up at the restaurant shortly after 8 pm to deliver his concession personally to Wilson.

Wilson had campaigned for more fiscal responsibility of the city’s $502 million budget and better priorities for the city’s 11,000-student public school system.  “Justin beat a 15-year incumbent,” Euille added. “That says a lot about his inherent political gifts.”

Wilson had previously served as Euille campaign treasurer, and the Mayor joined all of the city’s councilmen in endorsing his protege in both the primary and the general election, which led to criticism that City Hall might be too uniform in its voting.

“The whole thing about us being in lockstep was the craziest thing I’ve ever heard,” said Councilman Rob Krupicka. “Justin and I argue about issues all the time…I think [his victory] sets us up to deal with economic sustainability and environmental issues in some really bold ways.”

Cleveland,  58, had pledged to be an independent voice and “agitator” on the all-Democratic council.  Known as “Dr. No” in some parts of the city because of his opposition to spending proposals that his city council colleagues felt were crucial to the growth of the city, he did agree with his opponent on such things as opposition to the Mirant power plant and the need for more playing fields around the city.

Cleveland moved to the city in 1971 and served on city council from 1988 to 2003, becoming vice mayor for six of those years. He served in the Army in Vietnam, before embarking on a 30-year career as a U.S. Capitol Police officer. He ran unsucessfully for mayor in 2001, and in recent years was a civic activist and Alexandria substitute middle-school teacher.

“Bill is my friend and he has served this city for a long time, and I hope he will continue to do so,” Euille said.