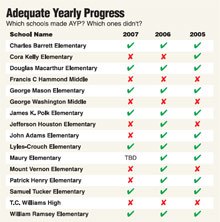 The Adequate Yearly Progress report released recently by the Virginia Department of Education shows several schools in the Alexandria public school system failed to make the grade, and puts the school system in the red, according to information released by ACPS recently.

In addition, several schools that did not pass last year remain in that category this year as well. Those are Cora Kelly Elementary School, Hammond and George Washington middle schools and T.C. Williams High School. The scores were too close to call for Maury Elementary School, leaving it in the to be determined category.

According to federal guidelines, Title I schools that dont make AYP for two years in a row must take established steps to remedy the situation, and are assigned a School Support Team by the VDOE. The SST reviews current plans and provides technical assistance.

The goal of the ACPS has always been to increase student achievement, were doing things above and beyond the requirement, added Carlini.

To address any shortfalls, we are looking at some new strategies, said Cathy David, deputy superintendent at ACPS. One plan, aimed at students learning English as their second language, is the introduction of literary coach positions that will emphasize reading and writing skills. Another strategy is to install sheltered instruction observation protocol teams  at each elementary school to show teachers how to mix language lessons with program lessons.

According to VDOE rules, when a school does not meet the AYP for two years in a row, the only requirement is that they allow parents to choose whether to send their children to that school the next year. The ACPS is sending a letter out to all parents at Cora Kelly, outlining that option.

The AYP status adheres to federal Department of Education guidelines, while being a fully accredited school is based on state guidelines. Both are initially based on the Standards of Learning tests. To earn AYP status the schools must reach 29 benchmarks, and missing even one benchmark can result in not making AYP. This is part of the No Child Left Behind Act of 2001, which requires states to set measurable math and English hurdles, participation in testing, and graduation and attendance. Each year, the requirements get more stringent, making it harder for schools to achieve AYP. The goal is for all schools in Virginia to meet this requirement by 2014.

While the school system is not releasing accreditation until September or October, members of the school board have been told that the only schools that will not be fully accredited this year are Jefferson-Houston School for Arts and Academics and the two middle schools.

All of them failed to meet the accreditation standards set by the state of Virginia because of poor math scores.