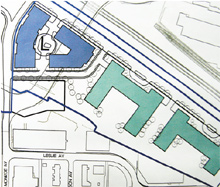 The landscape at Potomac Yard is changing. Later this month, traffic will be rerouted onto one span of the new Monroe Avenue Bridge, Main Street and Potomac Avenue are taking shape, and construction is ongoing in many parts of the Yard.

Three unresolved issues, however, need closure: what to do about Rail Park; where to locate the pedestrian bridge that is supposed to connect the two parts of the Yard divided by the rail corridor; and where to locate a dog exercise area.

When the plan for Potomac Yard was approved in 1999, it contained triggers pieces of the puzzle that needed to be in place before other pieces could be constructed. One of those triggers is the construction of a pedestrian bridge. Potomac Yard Development, owner of the Yard, is proposing to locate the bridge at the northern end of Potomac Greens, to land on the north side of the rail corridor near the proposed town center and the large linear park. The steel truss bridge will have a single wooden span.

The city has used this type of bridge in other parks. It is rustic in appearance and will link the parks in Old Town Greens to bike trails and parks on the other side of the rail corridor, said Duncan Blair. We believe this is the best location for the bridge and provides the kind of connectivity described in the plan.

The Planning Commission will discuss this proposal at a work session on Nov. 8. We need a decision very soon because we also have to get approval from CSX and WMATA because the bridge goes over both Metro tracks and CSX tracks, said Kevin Hall, development manager for the project. That approval can take up to a year, so we really need to move quickly.

Rail Park
Rail Park is a 3.5-acre piece of land between the Metro and CSX tracks. It was set aside as parkland in the 1999 plan, but many landscape designers consider it impossible to develop.

Someone would have to spend a great deal of money regarding the land and planning lighting for it to be a usable park, said Judy Noritake, chair of the citys Parks and Recreation Commission.

PYD is proposing to deed the parcel to the city to have in its open space inventory and do with it what seems appropriate, Blair said.

Noritake supports this proposal. We could use it as a nursery for seedlings and transplant the trees throughout the city when they are sufficiently grown, she said. If, at some time in the future, the community finds another, superior use for the property, we can reconsider the issue.

This fulfills our commitment to provide a dog exercise area, Blair said.