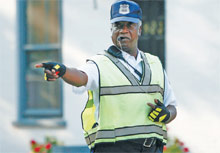 Near the traffic island where eastbound Duke Street hits Henry Street, an SUV poked out into the rush hour traffic and turned right onto Henry from the middle lane. Two more cars did the same thing before traffic enforcement officer Charmaine Ingleton shook her head as if to admonish the drivers.

They shouldnt, she said, before stepping out in front of cars heading west onto Duke.

I specifically tell them no. If they sneak up here and try to turn there, it could lead to an accident, Ingleton said.

Its all part of the daily routine for the traffic enforcement officers in the citys Gridlock Reduction Project, known as the GRIPS. The project, which started six years ago, involves 10 traffic enforcement officers placed in the busiest intersections around the city during afternoon rush hour to keep the traffic flowing by keeping cars out of the box in the middle of the intersections. When the traffic light turns red and cars are caught in the box, they block the traffic that has a green light, and it trickles down to other intersections leading to gridlock that could go on for several blocks.

By not allowing vehicles to clog an intersection, you get a better flow of traffic, said Lt. Paul Story, the officer in charge of traffic enforcement in the city. The focus is to keep the intersection open, Story said.

The traffic enforcement officers are trained in traffic safety but are not regular police officers, so they dont carry a gun or write tickets. We prefer that they keep focused on the job at hand, said Story. GRIPS was voted in by the city council after former Councilmen David Speck introduced the idea in 2002. The GRIPS officers are paid overtime rates, Story said, but it is not an easy job to fill, especially at the citys busiest intersection at Duke and West Taylor Streets.

Although the officers have a uniform and whistle, many times it takes a little effort to catch motorists attention. John Nasibi works the intersection at Prince and Henry Streets, a block from Ingletons station. Hes been there four years and when necessary, he waves and points, getting the drivers attention one way or another. Over at the intersection of Gibbon Street and South Washington, Norman Howard does the same and sees the same faces from day to day.

Buses and emergency vehicles get special treatment. When the cars heading east on Duke Street wont let a bus merge into the lane, sometimes it will be backed up all the way to Jamison, said Ingleton, so she takes matters into her own hands and ventures out into the intersection. When she sees an emergency vehicle with sirens blaring, she puts on her reflective gloves and stops all traffic. You stop everybody, that emergency vehicle has to go through, she said.

Events on the Woodrow Wilson Bridge affect the traffic on the streets of Old Town as well. When something happens on the bridge, Ingleton knows it within minutes, and gets the news from motorists. All it takes is a broken-down vehicle and it impacts the traffic down here, she said.

On Duke Street, Ingleton has noticed the increase in traffic since she joined the GRIPS team six years ago. Offices and condos opening in the Patent Trademark buildings on Eisenhower made a difference, too. Over the last year, its [traffic] gotten even worst, Ingleton said.