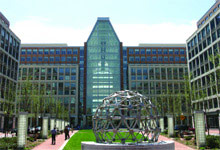 The United States Patent and Trademark Office in Alexandria said Monday that the distributors of  five popular filesharing programs repeatedly deployed features that they knew or should have known could cause users to share files inadvertently.

The Patent Office report identified five features in recent versions of five popular filesharing programs that could cause users to inadvertently distribute to others downloaded files or their own proprietary or sensitive files, and was issued three weeks after the Bush Administration requested $2 billion in 2007-2008 fiscal year funding from Congress for the PTO’s operations.

Computer programs that can cause unintended filesharing contribute to copyright infringement, and they threaten the security of personal, corporate, and governmental data, said Jon Dudas, the under secretary of commerce for intellectual property, and the Bush Administrations point person on copyright policy.

The report shows that distributors of filesharing programs deployed features that could cause inadvertent sharing even after repeated warnings that these features could facilitate identity theft and breaches of personal and national security.

In 2003, two Congressional hearings were prompted by research indicating inadvertent sharing could be caused by search-wizard and share-folder features.  After the hearings, many distributors adopted a Code of Conduct that prohibited use of these features.

Nevertheless, in 2004 and 2005, many of these same distributors kept deploying more aggressive versions of search-wizard or share-folder features, Dudas said.  Many distributors also deployed other features, like partial-uninstall and coerced-sharing features, that also had a known or obvious potential to cause inadvertent sharing.

The report also shows that inadvertent sharing has had severe consequences for governments, corporations and individuals.  In a 2005 Information Bulletin, the Department of Homeland Security warned that inadvertent filesharing could compromise national security: There are documented incidents of P2P file sharing where Department of Defense sensitive documents have been found on non-US computers with no protection against hostile intelligence.

Individuals have also been affected.  On November 30, the Denver District Attorney indicted a gang of identity thieves who had used the program LimeWire to access names and account information from personal and business accounts across the country, and then use that information to open new bank accounts in the Denver area.  The indictment alleges, The groups common goal was to obtain and use methamphetamine as well as steal money and merchandise for personal use.

A decade ago, no one would have thought that copyright infringement could threaten personal or national security, Dudas said. Today, that threat is a reality; we need to understand its causes and find solutions.

PTO officials forwarded copies of the report to the Department of Justice, the Federal Trade Commission and the National Association of Attorneys General.  A copy of the report may be found at http://www.uspto.gov/main/profiles/copyright.htm.

Patent office expansion
The report comes as the Patent Office has announced plans to lure 6,000 examiners to its workforce.

Having completed its move in 2005 from 18 cramped buildings in Crystal City to a sprawling campus at Carlyle, the patent office is finding that a massive backlog of patent applications is forcing it to scramble to find even more office space in the city as it seeks to hire 1,200 new examiners each year over the next five years.
The PTO hired 2,200 new examiners in 2005 and 2006, but with nearly 701,000 patent applications piling up, and yearly attrition and retirement rates running at 10 percent of their 8,000-person staff, this will force the PTO to hire 6,000 new patent examiners over the next five years.

Intellectual property is now a $5 trillion industry, with a gold rush of new cell phones, computer software, interactive videos and other new forms of communications needing patents at a breakneck pace. The PTO has grown as technology continues to explode.

2006 was a record-breaking year for us, said Dudas.

The nearly doubling of the PTOs highly-compensated work force is causing the citys urban planners to salivate over the added jobs and tax revenue it has brought. By every measure, this is definitely a boon to the city, said Stepanie Landrum, the acting executive director of the Alexandria Economic Development Partnership. This has far exceeded our expectations when we initially made our pitch to them to come here.

Economic benefits
The city has been reaping ancillary benefits from the PTOs move and subsequent growth.

Nearly 4,000 new jobs in the Carlyle-Eisenhower Valley corridor have been created in the last few years, mostly due to the PTOs arrival, Landrum said. Currently, nearly 700 new luxury condominiums or apartments are under construction at Carlyle,  and last month, a PTO sub-contractor told the city it planned to bring 400 additional jobs to Carlyle to help train the new patent examiners in how to telework, she added.

The question remains for the PTO and the city is where to house all the new hires.

Many of the new examiners will be working from home (teleworking) or hotelling, a new space-saving concept which urges or mandates that some examiners share their private offices with as many as five other examiners at different hours of the day.

The competition for qualified hires can be intense. The PTO often goes head-to-head with private employers in hiring college graduates and others with specializations and technical degrees, such as electrical engineering and computer science.

We go all over the country looking for good people, said Brigid Quinn, a PTO spokesperson. Its always a challenge.