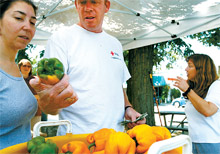 City maintenance crews, farmers and those who want to purchase locally grown produce are feeling the heat. Since May, rainfall in the region is down by six inches. Last Saturdays high temperature of 88 degrees broke a string of 11 straight days of 90-degrees or above. At the Del Ray Farmers Market, vendors are feeling the effects.

Because we havent gotten any rain and because its so hot, we have to water much more than usual, said a representative from Three Way Farms in Swanson, Va. This costs money and we are eventually going to have to pass that cost on to our customers.

The extreme heat and lack of moisture in the soil also causes insects to turn to the crops for water. That also means we have less marketable produce, said another vendor at the market.

The lack of locally grown produce means that grocery stores have to look elsewhere for fruit and vegetables. Representatives from both Whole Foods and Harris Teeter said that while prices are not significantly higher than last year, that could change if conditions dont improve.

Its not easy being green
The citys parks are suffering as well. Our athletic fields are mostly irrigated but that means we are spending significant amounts of money keeping the water on, said Roger Blakeley, the deputy director for parks.

We have lost some yearling trees because we just cant keep them sufficiently watered. If people see trees in the medians in front of their houses, they should water them, Blakeley said.

As to flowers and other plants around the city, The heat and the lack of rain are making it impossible to keep them alive, Blakeley said. The only thing that is doing well is Bermuda grass. It loves the heat and the dry conditions. This is a transitional climate so almost nothing else we plant can withstand this type of weather, Blakeley said.

Another problem that has been caused by the weather is the appearance of large nests of hornets. We dealt with probably the largest nest of hornets I have ever seen a couple of weeks ago. We didnt have the equipment to deal with it and our contractor had to use special equipment, Blakeley said.

The hornets nest was located in a culvert on a path that connects the 800 block of S. Lee Street with the bike path. The hornets are looking for a place to stay cool and the rocks in the culvert provide that. However, the heat makes the hornets mad and swarms of mad hornets in close proximity to people is not a good combination, Blakeley said.

City services
Even though its hot, trash must be collected and the streets must be maintained. We cant start collecting solid waste until after 6 a.m., so that means we are often working until after noon, said Doug McCobb, the deputy director of the citys department of Transportation and Environmental Services. We are making sure that all of our trucks have lots of water and ice and are encouraging workers to come into the maintenance shop for lunch to get cool.

Also, some jobs are being re-prioritized. We are trying to do those jobs that are less strenuous while it is so hot. They may just have to wait until September. Theres plenty to keep us busy, McCobb said.