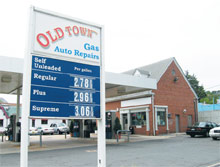 Independent names on the gas station scene around Alexandria doesnt always equate to lower prices at the pumps. In recent years, the spot market price that was the saving grace for the independent stations has evaporated on the global gas market.

Tom Harvey is the owner at Hollin Hall and the founding president of the Service Station Dealers Association, whose membership includes franchise gas stations and independent dealers. Harveys station, the Hollin Hall Automotive Service Station, was a Gulf station, a Chevron, and then a Shell before becoming independent. He initially went independent because gas was purchased under a zone pricing system, where the prices were locked in with all the competitors, and he could get it cheaper as an independent dealer.

The very next day I was able to buy my gas 46-cents cheaper, he said. Harvey was able to buy gas at spot market price, which was cheaper than the dealer tank wagon price so it made it profitable for the independent station.

About the same time as Hurricane Katrina struck, the spot market price seems to have increased. Today the advantage of being an independent dealer has disappeared, he said. There are some independent gas stations, including Sheetz, Wawa and Racetrack, that focus on their convenience stores to make a profit, and use the gas sales to bring customers in, but the smaller independent dealers are going out of business, Harvey said.

Despite the prices leveling out, newcomers are emerging around Alexandria, including the Del Ray Service Station on Mount Vernon Ave., Old Town gas station on North Washington, Liberty and Harveys station on Fort Hunt Road. All of these stations were part of the big three Exxon-Mobil, Shell or Sunoco at one time and went independent because of the price of gas. Last week, for example, gas was $2.75 at the Del Ray Service Station, while the Shell across the street priced a gallon at $2.78. We always have a low price, everybody likes it here, said Del Ray manager Rohan Perere.

Station owners have to start looking beyond the prices to keep their customers. At the Hollin Hall station, in the middle of the Mount Vernon community, Harvey sees the same faces from day to day and focuses on customer service to keep his clientele. Even though the pumps are labeled self serve, he has attendants pump the gas just like the old days when full service was available, and checking under the hood was the norm.

Dan Gilligan, president of the Petroleum Marketers Association in Arlington, noted the role of the neighborhood station where customer contact is a factor. It doesnt matter what brand it is, he said.