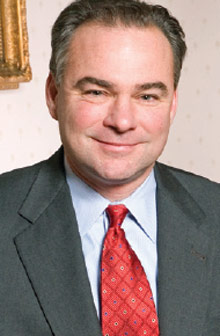 Kaine met with 13 Northern Virginia political leaders from Arlington, Fairfax, Loudoun,  and Prince William counties who oppose the plan because it forces them, instead of the state legislature, to raise the taxes and fees to fund more than $1.5 billion a year for needed road and transit improvements.

“As it stands right now, that’s a non-starter,” Kaine said afterwards in a conference call with editors from The Alexandria Times. “Suffice to say, there was 100 percent agreement that the bill needs work. … My goal is to fix it between now and the 26th.”

Kaine termed his meeting at the Fairfax Government Center “invigorating” because the bill contains a few “good features,” and is vastly improved over last year’s. Kaine said he is determined to make changes to it before state legislators return to Richmond for a special one-day session on April 4.

The current legislation, he said, would raise $500 million for new road projects in Northern Virginia by imposing a “significant escalation” of local real estate taxes and driver’s fees and require local governments to take responsibility for paying for improvements of traffic-clogged urban roads.

Following his meeting with local elected officials, a variety of them commented on their discussions with Kaine in their two-hour, closed-door meeting.

“Northern Virginia is the blood flow of the Commonwealth,” said Scott York, chairman of the Loudoun County Board of Supervisors. “No one [in the legislature] can say they’ve raised $400 million because they haven’t. It can only be raised if we raise it. I applaud the governor for hearing our concerns.”

Fairfax board Chairman Gerry Connolly said it was a good preliminary discussion, and did not foresee the bill requiring “radical surgery.”

“This allows us to have a bill that is workable,” Connolly said.

Prince William Chairman Corey Stewart said that any compromise need not be partisan, but only that a deal be reached.

“There was a large degree of consensus among local officials that it makes them vote on local tax increases,” Kaine added. “My goal is to fix these regional packages and then turn my attention to the statewide plan.”

Fairfax’s main beef with the transportation proposal was that it would require the county to bear the burden of new roads construction and maintenance, but Kaine said the so-called roads devolution was an item that was universally opposed. Rather than striking it from the bill completely, he said, it was likely that it would become an optional provision, allowing jurisdictions that already build their own roads using state money to continue doing so.

“Fairfax not being supportive takes a huge chunk of potential revenue out of the Northern Virginia package,” Kaine said.

In the end, Kaine said he was willing to compromise on legislation, “but I will not sign a bill which is a bad bill which does not advance the ball on transportation,” he said. “Why put everyone through the drama?”

Kaine ran for governor in 2005 on a platform which espoused better land use and seeking to stymie runaway development in areas which could not support new housing or retail projects with inadequate transportation infrastructure. A bill he has proposed that mandates a transportation study for areas with significant re-zoning has been held up for a year in the Republican-led state legislature.

Your Views: Lets be loud about climate change

Kassidy McDonald - October 6, 2022
To the editor: Recently our local government sent out an email announcing the creation of an office on climate change. When I read the first...