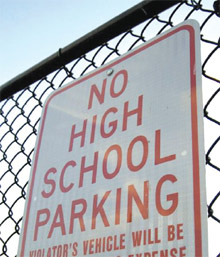 Over in the Northridge neighborhood off King Street, Francis Jernigan had a few close calls pulling out of her driveway. Her vision was blocked by all the students cars from T.C. Williams, who use Scroggins Street in front of her house for parking. The cars blocked Jernigans line of sight, and she remembered one time in particular, I had to screech on my brakes, she said.

One street down from Scroggins on Cleveland Street, the neighbors got so tired of the student parking, the residents petitioned City Council to establish a two-hour parking zone last year.

We dont have issues any more because its permitted, said one resident.

The parking situation might get worse for the residents of Northridge this year because the parking garage at new T.C. high school will not be finished during the 2007-2008 school year, and a majority of the 260 spots they will have will be reserved for the staff and visitors. The street between the school and Chinquapin Park next door will only have parking on one side to cater to the buses, too.

Alternatives
School officials are hoping to get students to carpool, ride the bus, or work in some physical activity by walking or riding bikes to school. Using these ways to get to school will work in with the new schools overall green theme as well. We really strongly encourage the students to work on the environment, said Alexandria City Public Schools spokesperson Amy Carlini. There was a full explanation of the parking situation in the Annual ACPS Welcome Back letter, which was mailed out in August, said Carlini.

Grace Goodwin will be a junior this year, and plans on driving her Jeep and parking over on Scroggins. She didnt experience any problems last year parking there. I was planning on doing that again, she said.

Although the residents of Cleveland Street did something about their parking woes, things will still be the same on Scroggins. That doesnt mean the police wont be out looking for illegal parking, said Lt. James Bartlett of the Alexandria Police Department. What ever signs are out there will be enforced, Bartlett said. There was some grumbling last year from people in the neighborhoods surrounding T.C., said Bartlett. The police responded and extra parking enforcement officers were put out there, he said.

T.C. alumnae Vicki Fraser remembered the parking woes while the new building was under construction. At lunch you had to move your car, she said.

No parking areas
There are a few large parking lots in the area surrounding T.C. and students have used these for parking as well, but they are private property. In the lot at Everly-Wheatley Funeral Home, the students parking efforts were thwarted in the past. We put signs up and then tow them if they dont remove them, said Rhonda Yent, general manager at Everly-Wheatley. Its private parking, she added.

The Scottish Rites Temple has a large lot, and rents some parking to outsiders, but they havent made any arrangement with the schools. According to Walter Downs, secretary at the Temple, he would be willing to listen to a proposal by the School Board and city manager, and then maybe they can work out a deal.

In the Bradlee Shopping Center there area currently no signs indicating the parking is for customers only. Kari Blanco, property manager of the center with the Washington Real Estate Investment Trust in Rockville, Md., hasnt been contacted by businesses in the center about any parking problems and wasnt aware of the developments with the T.C. Williams construction. Typically parking spaces are for the patrons, she said. Any time there is a problem at the center, well address it, she added.