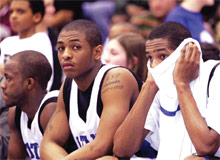 The T.C. Williams boys basketball team dug itself into a hole against Freedom in Saturdays Virginia AAA state quarterfinal, and despite a valiant run at the end of the game, the Eagles defeated the Titans, 80-70.

T.C. Williams (25-4) trailed by eight points with just more than three minutes left in the game, but was able to cut its deficit to one on a Kamal Terrell 3-pointer with 1:18 to play. The Titans would not score again, however, and Freedom finished the game on a 9-0 run.

In the end, the Eagles had two advantages offensive rebounding and Cameron Long. Freedom grabbed 18 offensive rebounds, which led to numerous easy baskets, and the George Mason-bound Long tore up the Titans defense for 24 points, including a thunderous dunk that brought the crowd to its feet.

Glenn Andrews led the way for T.C. Williams, scoring a game-high 31 points, 15 of which came in a third quarter that saw the Titans turn a seven-point halftime deficit into a one-point lead.

The teams were tied 14-14 after one quarter, but Freedom outscored the Titans 21-14 in the second to take the lead at halftime. Andrews then scored over half of T.C. Williams points in the third quarter. He scored five points in the final 22.5 seconds to send the Titans into the fourth with their last lead of the game.

We had a great season, said senior Mike Davis, who scored 15 points in the loss. Our goal was to win the state championship, not just the Northern Region championship. Its tough to end here.