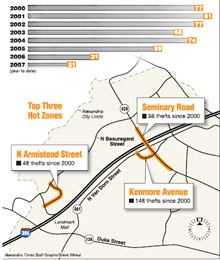 Auto theft is down by more than 50 percent in 10 years. However, those who live in Alexandrias West End and own a Honda should beware.

In 1997, 813 automobiles were stolen in Alexandria. In 2006, 380 cars were stolen. While the incidents of stolen vehicles is up slightly this year 280 have been swiped, year to date Alexandria police are generally pleased with the long-term trend.

People have gotten a lot better educated about how to prevent their cars from being stolen and manufacturers are making vehicles that are a lot harder to steal, said Detective Vincent Jones, who has been assigned to grand larceny, auto, cases for more than a year.

Older cars are easier to steal because they didnt have computer chips. Now, you almost have to have a key from the manufacturer to steal a vehicle, Jones said.

Also, as anti-theft devices go, clubs are probably the best. I have never taken a report of a stolen car that had a club properly attached, Jones said. Kill switches and alarms can be bypassed but, for some reason, its much harder to take a car that has a club on the steering wheel. I did take one report from an individual who owned a club but it was in the back seat when the car was taken.

Most popular to steal
Hondas are still the most popular car to steal, appearing one or two on the list of most stolen vehicles for each of the past six years. They are inconspicuous and tend to be harder to spot, Jones said.

We dont see many reports of stolen Hummers.

The three top locations from which automobiles are stolen are all in Alexandrias West End. There are a lot of apartment complexes out there and the most popular locations for car thieves are close to I-395, Jones said.

Who is stealing cars in Alexandria?

Mostly teenagers and young adults, mostly males, Jones said. For the most part, they take them for joy rides.

I have seen more chop shops in the region than there were in the past but not in Alexandria. The chop shops tend to deal in older cars for the parts, Jones said.
What to do

What if your car is stolen? In 2002, only 23 percent of the cars stolen in Alexandria were recovered. The recovery rate today has now improved between 45 and 50 percent.

If we havent found a stolen car within 45 days, the likelihood of recovering it has gone down a lot.