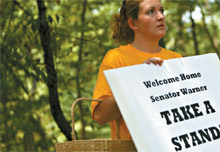 Fort Willard Circle in the middle of the Belle Haven neighborhood was the site of an anti-war protest, aimed at greeting Sen. John Warner (R) as he returned home from the summer Senate session. Warner lives just a block away from the circle and protesters staged a largely symbolic event on Friday, Aug. 3, hoping to see Warner, or at least bring some attention to their cause.

Lisa Switzer, a member of the Americans Against Escalation in Iraq and the driving force behind this protest, which is part of the groups Iraq Summer Campaign, said Warner follows Bushs lead on Iraq issues, and we just want to get the point across to him. Switzer insisted that the AAEI is pro-troop but they want responsible redeployment of our troops, she said.

Lindsey Gardner, another protester, has canvassed the Belle Haven neighborhood in the past trying to get people to speak up against the war, he said. At the Fort Willard event, they were joined by fellow protesters Hadley Birkett of Reston and Ron Fisher, who was not officially part of AAEI but is running for a local political office in the Green party.

At the height of the protest, which was held at 1 p.m. on one of the hottest days of the year, Fisher read a prepared statement that emphasized his focus that the U.S. oil companies are gaining financially through the war. The people of Iraq will never benefit from the occupation, Fisher said. He also suggested that all the Humvee military vehicles be painted blue and turned over to the United Nations.

Since Fisher is not a member of AAEI, Switzer made sure his views were independent of their official agendas. Thats his opinion, were not necessarily endorsing this, she said, as Fischer went on.

There was no sign of Warner throughout the protest, but a few cars went by and the drivers gawked at the small group with curiosity.

The Deringers house faces the circle, and Alex Deringer was surprised to hear that protestors had set up in her neighborhood. The sight of people posting signs and vying for attention did not appeal to her.

I dont particularly like it; to me its an intrusion, she said. Her husband Caulley, didnt like it either. We prefer not to have protests right in our backyard, he said. They were both concerned about the focus on their neighbor, Sen. Warner, who Alex Deringer described as a great man, nice, very cordial, neighborly, she said. Although the protesters are entitled to their own opinions, Alex Deringer said, In your own neighborhood, you shouldnt have to deal with protests, she said.

Gardner found attitude as well when he went door to door with his message. There are a few people who were certainly against it as well, he said.