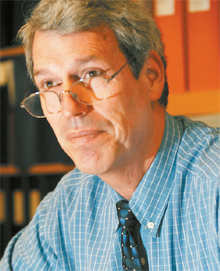 Last weeks City Council work session on the Capital Improvement Program was the beginning of the FY 2009 public work on the City budget. The city staff, however, has been hard at work since July, the beginning of FY 2008.

FY 2009 budget requests from the various departments in the city are already due, said Bruce Johnson, the director of the citys Office of Management and Budget. Really, we have just a couple of months between the Councils budget adoption in May and our work on the budget for the next year.

Before the public process is too far along, Johnson provided a primer on understanding the city budget. The FY 2008 budget and six-year CIP is compiled in hundreds of pages of information in two large binders. Johnson made it simple.

The FY 2008 budget for the city is just about $630 million: $519 million from general funds and $111 million from money that we get from the state, the federal government and grants. The $519 million comes from city revenues, mostly from taxes and fees that we collect, he said.

That money is not kept in a vault at City Hall. The city treasurer invests it in very safe investments. Those investments dont earn as much interest but they are virtually risk free, Johnson said.

The planning process In July and August, city budget staff met with department heads and gave them a basic forecast of whats projected to happen in the following years budget cycle.

For example, this summer, we told everyone that this year is going to look pretty much like last year: there isnt going to be any money for new programs and we may need to cut some things that are nice to have. Our real estate assessments are not going to go up next year so our revenues from real estate taxes arent going to go up either, Johnson said.

Department input
The department heads then began working with their own staff to develop requests. Last year, City Manager Jim Hartmann implemented the Managing for Results Initiative, which had each department broken into programs and activities for the purpose of budgeting.

There are 30 departments with 150 programs and 500 activities, Johnson said. This makes the budget easier for people to understand. You can look at each City department, know what programs are contained within each department and see what activities fall under each program.

For example, the fire department has an Emergency Medical Services program with various activities such as ambulance response.

Not only is it easier to understand in the budget but it is easier to evaluate from a personnel point of view, Hartmann said in an earlier interview.

Once department heads have submitted their budget requests (by October) the budget staff prepares a briefing memorandum on each for the city manager.

The city manager then meets with each department head to discuss his or her request (by December). After the city manager finishes those meetings, we will schedule community meetings on the budget so that we can talk with our residents about what to expect in the budget as Council is about to begin deliberation, Johnson said.

On a parallel track, the public school system is conducting its own budget process. We dont see their budget request until Jan. 31 after the School Board votes but a member of our staff attends all of their budget sessions so that we have some idea of what is going to happen, Johnson said. The city manager presents a combined city and school budget request to Council after that. This year, that will happen on Feb. 12.

Councils involvement Before Council gets the managers request, there are things for them to do. Last year they set budget targets, Johnson said. We provide them with the same type of information that we give the department heads about revenue forecasts and they decide whether they want to set targets for us to consider as we prepare our budget request.

That will happen at the Council retreat, this year on Oct. 27. Those targets will then guide us, Johnson said.

Budget surpluses Assistant Manager Mark Jinks announced that the city may have as much as $9.5 million above the revenue projections from April. This money can be reprogrammed once the FY 2007 books are closed and expenditures balanced against that additional revenue.

Next week: what happens after City Council receives the managers budget request