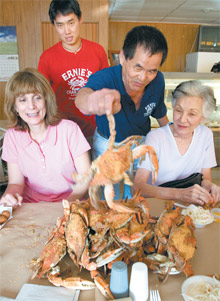 On the wall at Ernies Original Crab House and Seafood Restaurant on Route 1 in Mount Vernon is a crab barometer which informs customers that the tasty, steamed crustaceans it serves up multiple ways are either Tops, Good, Fair, or Eat at McDonalds.

Lately, the restaurants longtime owner, Gil Mao, has been fighting an uphill battle to keep his loyal customers from straying up the street for a Big Mac.

We used to get a lot of crabs from the Eastern Shore, said Mao, a South Korean entrepreneur who tends the restaurant seven days a week with his wife, Khunja, and their three grown children. Its very hard to get crabs these days. Every year it gets worse.

Two decades ago, a dozen or so crab houses populated the Northern Virginia restaurant landscape, with huge hauls of Maryland blue crabs by the pots full arriving daily from Marylands shorelines.

Today, only two of the iconic crab houses are left, perhaps a sign of the times of a shrinking, endangered crab population that leaves restaurateurs scrambling every day in search of wider supplies of the delectable crustaceans.

Ernies Original Crab House opened in 1943 on Alexandrias Route 1, and for four decades it sold millions of all-you-can-eat Ernies Maryland-style blue crabs, hot, steamed and cooked with Ernies own special seasoning. Crabs by the bushel arrived daily through the kitchen entrance to feed hungry local families craving for a few fond memories of a summers-past Eastern Shore vacation.

Plentiful at one time
The family of the original owner sold the legendary crab shack on Richmond Highway and a second location on Fern Street to Mao and his family in 1985. Back then, all-you-can-eat Maryland crabs were plentiful, selling for $12.95 for all-you-can-eat portions. Today, that price is 150 percent higher.

Because of a shortage in availability of fresh crabs, Mao shuttered the Fern Street location of Ernies two years ago and added fried clam strips, sea scallops, calamari, and even hamburgers to the menu to keep his loyal customers coming. Another crab eatery, Capt. Whites on Route 1, also shut down two years ago, leaving Ernies and Captain Peels in Fairfax City as the only two crab-loving emporiums remaining in Northern Virginia.

Rising costs and an ever-shrinking supply of Maryland crabs appear to be the culprits. Times are tough for restaurateurs and Eastern Shore crabbers.
There are fewer crabs than there were this time last year, said Steve Smith, 59, a life-long crabber from Fairhaven, Md., who delivers his weekly crab catch to Ernies each Saturday. Ive had bad catches in years before, but as this year goes, the yield is lower.

Habitat threatened
In recent years, the shellfish population has turned alarmingly low. From the 1950s to the 1970s, the average annual oyster catch was about 25 million pounds per year, and the blue crab harvest contributed nearly a third of the nations catch, according to a statistics provided by the non-profit Chesapeake Bay Foundation, a fierce guardian of the indigenous crabs.

Today, the Bays oyster population is a mere two percent of its historic level, and reduced amounts of underwater grass habitat, in addition to low summer levels of dissolved oxygen, continue to keep supplies of the keystone species well-below the average.

Last months discovery of Chinese mitten crabs, which ecologists fear might disrupt the delicate ecosystem of the bay, is leading some to worry even more about the Maryland crab. In 35 years some strange things come up in those crab pots, Smith said. This is one of the stranger things weve seen.

Price elasticity appears to be driving up the cost of dining out on fresh crabs. On the board at Ernies Original Crab House is a scratched-in price, $29.95, for all the crabs you can eat, a price which can suddenly change depending on stock.

While 20 years ago Maryland Blue Crabs were selling at $33 per bushel, today they can command as much as $110 per bushel for the tastier crabs, but a better moving average is around $80-90 per bushel, Smith said.

To replenish his blue crabs on a daily basis, Mao said he must he must ship them in overnight from the lakes of Louisiana, Texas and Florida, using commercial airliners to fly them in fresh via Ronald Reagan National Airport or BWIs Marshall Field.

I had no choice. A lot of local crabbers were quitting because they were struggling, Mao said. Ten years ago the fishermen would tell me theyd haul in 15-20 bushels per day. Now, some days they might haul in one or two bushels. Over the past 10 years it has gotten worse.