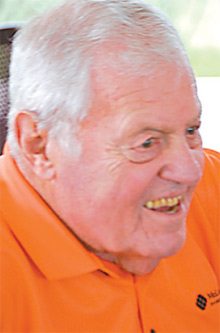 For decades he was known to many in Old Town as the distinguished man with the fedora and camelhair coat, greeting everyone warmly as he walked to work with his equally distinguished dog “Bentley.”

To the American arts world, he was known as Oscar P. Ryder, one of the country’s greatest collectors of Early American furniture and die-cast mechanical banks, a collection he amassed over several decades.

In Alexandria, he was as a known philanthropist and shrewd investor who partnered last year with Shawn McLaughlin to run the city’s biggest investment firm, McLaughlin Ryder Investments on Prince Street.

Last Wednesday, hundreds gathered at the Chapel of Episcopal High School to say farewell to Ryder, who died Friday at Inova Alexandria Hospital of natural causes. He was 82.

Ryder was a third generation Alexandrian, a man who dropped out of college but through shrewd investments and savvy contacts was able to afford in 1962 what was then the most expensive home in Virginia, 415 Wolfe Street in Old Town. The son of then Old Town’s only physician and the grandson of the city’s only Methodist minister, Ryder carved out a successful life through pluck and circumstance.

Ryder was born on June 18, 1925 at the Old Alexandria Hospital and attended the Jefferson School in Old Town and Episcopal High School. He enrolled at Georgia Tech in 1942 but was drafted into the Navy during World War II, where he sang in the Navy Choir and taught pilots how to use their radios during the war.

Married to the former Dorothy Ann “Happy” Comerford in 1954,  Ryder began his career in Michigan working in cargo sales for Capital Airlines, but in 1958 moved back to Old Town and became general partner of one of the city’s earliest investment firms, Jones Kreeger and Hewitt. Comerford died in 1999.

Later, he began Ryder & Co, which was acquired by Dean Witter (now Morgan Stanley), was a director of Alexandria National Bank and was a co-founder of People’s Bank & Trust, a forerunner of Wachovia, today one of the nation’s largest banks.

The father of four children, Ryder kept a home in Nag’s Head, N.C., where he was compettive surf fisherman and captain of the Tri-State Angler’s Team. “He was interested in so many things,” said Ruth Ryder, his widow, to whom he married in 2004. “But his passions lay in helping others, running the antiques show, golf and surf casting.”

Ryder was active with the Chamber of Commerce, the Historic Alexandria Foundation, the Friendship Firehouse and had founded and served as chair of Antiques in Alexandria, known as one of the ten best-attended antiques shows in America.

“He was my chief, friend and mentor,” said Janice Hughes, who worked for Ryder for 34 years. “He made this town a special place.”

“Being with him was like opening a window to Old Alexandria,” said Shawn McLaughlin. “He was one of the people who made this town and gave it the quality it has today.”