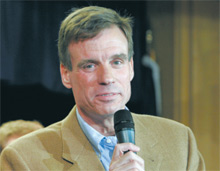 Former Gov. Mark Warner opened up his weekend home in King George to friends and political supporters Saturday. More than 5,700 friends, to be precise.

Warner, sporting a bandage on his knee from a pickup basketball game earlier in the day, stood patiently on his front lawn for five hours and greeted well-wishers personally, flashing his trademark grin and telling them, I need your help now.

With Warners Web site announcement on Sept. 13 that hes in, Virginias 2008 U.S. Senate race is off and running. Given Warners $200 million net worth and the $9 million hes collected for his political action committee, Forward Together, this Senate race is certain to be the costliest in Virginias history.

Im not going to lose this over resources, Warner said in an interview in his Old Town Alexandria office Thursday. I expect to raise much of the money, but at the end of the day I believe in this candidacy and Ill invest as well.

Warner invested $10 million of his own money in his 1996 losing race against incumbent John Warner, who is retiring in 2009.

Former Gov. Warner lost that race by 5 percent, but in 2001 he won for governor by a margin of 96,413 votes after campaigning as a moderate Democrat and building a power base in rural Virginia.

Hes not so much a politician than a patriot, said Ed Veazey, a lifelong Republican and retired U.S. Navy submarine design manager from Stafford County. Ive only voted for two Democrats in my entire life: John F. Kennedy and Mark Warner. … We only vote for the good ones down here.

Gazing at the stables, swimming pool and basketball court trappings of Warners good fortune Anne Whitney, who works at a Richmond food bank, said she admired Warner for his hardscrabble beginnings.

Hes had some real adversity in his life when he lost everything and got it all back, said Whitney. He failed several times before he succeeded.

Supporters said Warner would combine a hardened sense of fiscal conservatism with a dose of social responsibility if elected.

Hell bring an entrepreneurial take to the job, said Diana Waller, a small-business owner from Alexandria. Hell take risks and exhibit fiscal responsibility taken from his lessons as a businessman.

As governor, Warner worked to reform the tax code by lowering food and some income taxes and increasing the sales and cigarette taxes. The tax package raised $1.5 billion annually, which Warner credited with saving the states cherished AAA bond rating. The new revenues also helped to close a multibillion dollar budget deficit and allowed the single largest investment in K-12 education in Virginia history.

People in Virginia wanted to see their government get stuff done, Warner said. We had budget shortfalls, partisan bickering, and we came in and tried to fix the finances.

Warner also entered into an agreement with Democrats and liberal Republicans in the Virginia Senate to cap state car-tax reimbursements to local governments, which increased car taxes in many localities. To help rescue state finances, he shut down DMV offices across the state one day a week.

Some of my dear friends around the state forget that in my first year as governor I managed to make both parties equally mad, he recalled.

While he admits that being governor is probably a better job, Warner said he felt his skill sets as a CEO and conciliator might be more useful now in Washington than Richmond.

Ive already been governor, he said. What struck me, particularly when I was looking at the national race, is that there are so many issues which have had no real attention for the last seven or eight years.

Last year Warner wrestled for months over a decision to run for president, taking exploratory trips to Iowa and New Hampshire. But in October 2006 he decided not to run, citing the need to spend more time with his wife, Lisa Collis, and their four daughters. This time the vote at home came back supportive.

Lisa and the girls were pretty unanimous, he said. Theyd rather have me home than in Richmond.