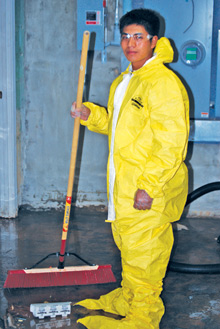 A water main break in the Belle View community of Alexandria Tuesday evening, Sept. 11, left a few businesses in the nearby shopping center with water in their basements and a big sink hole in the road that goes through the apartment complex acro

Water backed up after the pipe broke and much went into several businesses including The Italian Deli at Belle View, who had workers in the following day removing carpet and damaged materials.

It got pretty deep, some spots it was up to three or four inches, said deli owner Ted Arminio. It didnt smell great, he added.

Next door at the Dishes of India, it was much of the same. The water started coming from the back drain, said restaurant owner Naresh Bhatt. This was around 8 p.m., and they got all the customers out before workers started removing the bottom of the drywall and moving in the fans to air it out.

Right after water pipe broke, Arminio called the Fairfax County Water Authority who sent their contractors out to help. The response has been great, he said.

The water was under pressure in the pipes when they burst, causing much of the surrounding dirt to wash away, resulting in a sink hole, said Jose E. Diaz, a foreman for Tessa Construction that were doing the repairs. The workers used several pumps and rerouted the water around the sink hole so the tenants in the surrounding apartments did not lose water. Diaz predicted it would take about one week to fix.

It isnt the first time flooding problems affected the Dishes of India and other storefronts at Belle View. When Hurricane Isabel hit four years ago, businesses had to close. Renters of apartments and condos in the Belle View community were forced to vacate as well.