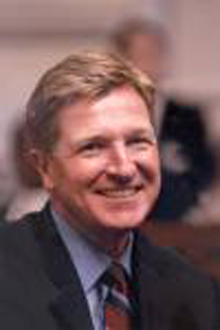 Del. Brian Moran (D-46) of Alexandria, the House Caucus chairman and a contender for governor in 2009, has launched a web site asking voters to sign a petition against Republican lawmakers who he says are looking to “raid” funding for education, health care, public safety and environmental protection to build more roads and mass transit in Northern Virginia.

“They want to pull $200 million away from these important programs to build roads,” Moran said, citing House Bill 3202. “We’re tired of sitting in traffic, but we can’t go backwards to solve the problem.”

Moran wants voters to tell Republican members of the General Assembly before the April 4 session in Richmond that “spending the savings account and maxing out the credit card won’t solve the transportation problem.” Moran calls it “the Republican raid on the future” which he said would turn investments into debts.

By Moran’s calculation, the funding for more roads and transit funding cuts as much as the entire budget for Norfolk State, Longwood University, James Madison University, Mary Washington College, UVA-Wise and the Roanoke Higher Education Center and the new College Institute combined. He said the Republican proposal would stop progress towards paying Virginia teachers at the national average and cuts as much as the entire budget of the State Police.

His calculations show that the proposal would cut $300 million a year for eight years, a debt, he says, “we’ll pass on to our children.”
“We can’t afford to undo the progress of the past six years,” Moran said.

Moran’s web site may be found at www.noraid.net.