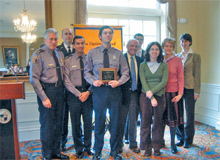 When Burke Brownfeld was in high school, he volunteered at the Alexandria Police Department. During college, he worked for the department during his summer vacations.

After he graduated, he applied for and entered the Police Academy. Now, just three years after graduating from the Academy, the Sunrise Optimist Club of Alexandria has named Brownfeld the Police Officer of the Year for his work on the police force and for his charitable work in civilian life.

As a police officer, Brownfeld has performed all of the routine duties that are expected of beginning police officers. He has worked patrol and done his share of midnight shift work. Now he is a member of the Departments Strategic Response Unit, a small unit funded by Homeland Security money that spends at least 50 percent of the time on anti-terrorism and homeland security work.

We also look for fugitives and conduct other investigations that are relevant to homeland security enforcement, Brownfeld explained. I really like it because no two days are ever alike. Its exactly what I have always wanted to do.

In his free time, Brownfeld works with an orphanage in Guyana and a group home for the teenage boys who have graduated from the orphanage but are not quite ready to be on their own. He began this work in college and continues it each year, using his vacation time to take children on walks to the beach and to tutor the teenagers.

When I was in college and had more time, I used to teach the kids at the orphanage English. Now that I have a job and less time, I just take them on walks to the beach every day and spend time with them, Brownfeld said.