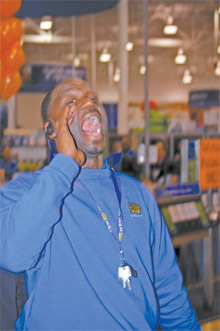 For the most part, a random survey of merchants in Old Town revealed brisk sales on Black Friday and over the weekend.

Sales were substantially up over last year, said Mary Helen Murray, store manager of Jos. A. Bank on S.Washington Street. When we opened at 7 a.m. on Friday, people were already waiting outside the door, which I found unusual for Old Town.

Merchants on upper and lower King Street also tracked heavy buying among holiday consumers, with clothing, artwork and even shotguns flying off the shelves. It was a madhouse here, said Michael W. Zarlenga, owner of the Trophy Room, which is liquidating in advance of its year-end closing. We did over $51,000 in sales over three days, which was as much business as we did during all of November last year.

The hottest sellers, which were marked down up to 40 percent, included Barbour clothing, pocket knives and 12-gauge shotguns, which were being sold from a Beretta outlet store just opened on the second floor. Clothing in general sells well during the holiday season, Zarlenga said. On Dec. 4, our discounts increase to as much as 60 percent to liquidate our entire inventory.

Retailers credited cool temperatures and heavy advertising by the Alexandria Convention and Visitors Association in drawing thousands of out-of-area shoppers to the historic district. We had no sale pricing but we still did great business, said Alice Delaney, assistant manager of the Paper Source at 118 King Street. We definitely did better than last year.

Next door at Decorium, joyous holiday music put consumers into a buying mode. It was wall-to-wall people all day, recalled Vivien M. Bacon, the stores manager. Decoriums owner Jeff Albert estimated that the store had at least a thousand more shoppers than the same time last year. It was a great weekend, he said. Driving sales were 20-percent across-the-board discounts, on everything from furniture to tins of emergency chocolate, undoubtedly fuel for the harried shopper. In a bid to collect customer information, Decorium also raffled off a $1,000 gift card, which was won by shopper Eileen Powell of Alexandria.

Bookstore closes
However, not all was rosy for some Old Town merchants. A Likely Story, the childrens book store at 1555 King Street, sent out e-mails Wednesday announcing the 23-year-old landmark bookseller was closing, effective that day. Owner Dinah Paul did not return e-mails requesting comment, but a sign posted on the door read: Like any great story, ours has come to an end. After 23 years, we have closed our doors for the last time. We greatly thank you for your patronage and the wonderful memories … You have made our two decades plus in business as magical as any story weve had on our shelves.

Kate Schlabach, owner of the Why Not? shop, reported flat sales over last year on the stores whimsical toys and and infant clothing. We try not to have what the big box stores carry, but still stay competitive with our prices, she said. Id just like to know how they get people to work at 4 a.m. Its hard enough to find people to work 10-6.

Some retailers took it upon themselves to spruce up sidewalks to attract holiday shoppers. Merchants in the 1100 block of King Street, led by John Brown of J. Brown & Co., collectively spent $7,000 to purchase and install huge planters and adorn lamposts with festive ribbons and ornaments. People commented like crazy how great this block looked, said Joseph M. Egerton, owner of Arts Afire at 1117 King Street. We were up 30 percent over last year. Anything and everything went.