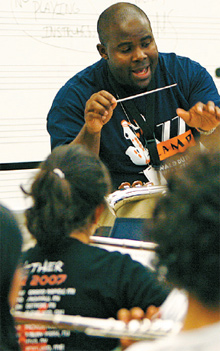 Each year high school students are finding it harder and harder to get into the college of their dreams. With that in mind, many of them abandon music for an additional academic course. Leadership Fairfax recognized the importance of music and those who teach music by awarding Vaughn Ambrose their 2007 Educational Leadership award.

Ambrose has been a music educator for nine years five years at Francis C. Hammond Middle School and four years at T. C. Williams High School. Its not easy to keep kids interested in music because there are so many things competing for their attention, Ambrose said.

His goal is to have 300 students participating in band at Minnie Howard and T. C. Williams. This year, he has 210 students in all of the high school bands.

Ambrose began playing music when he was 11 years old. I chose the clarinet because a friend of my fathers played the clarinet and used to come to our house on weekends and play. I thought it was really cool, he said.

Cool, he found, was relative. His band director complimented his tone on the clarinet but suggested he play the saxophone although, its the most expensive instrument and many of you arent going to be able to afford it, Ambrose said.

About that time, Ambrose also saw a saxophone player surrounded by beautiful women. I went home and told my parents that my band director said I had to play the saxophone, he said. It was the most expensive instrument and the guy with the sax got all the girls: what could be better?

He stayed interested in music and chose it as a career because, nothing else caught my interest. I would sit in English class and look out the window but I paid attention in band, he said.

He paid attention to the point that he not only teaches band at two schools, Minnie Howard and T. C., but also plays contract positions when he is available and has his own group. Earlier this year, he took time off and played two concerts with renowned singer Gladys Knight.

That was just incredible, he said. Thats why I keep doing this.

Concerts Scheduled
The Minnie Howard band will hold its winter concert on Dec. 17 at 7 p.m. at Minnie Howard. The T. C. bands will hold their concert on Dec. 19 at 7 p.m. at the school. The bands will hold a toy drive again this year and are asking people who attend these winter concerts to bring a gift card or a book to be donated to The Carpenters Shelter. Ambrose and his band will perform at Alexandrias First Night celebration on New Years Eve.