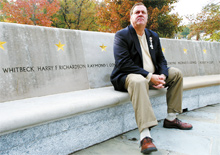 Panel 72, Line 121, of the Vietnam Veterans Memorial, lists Alexandrias Eugene Toney as Killed in Action. When he sees that, he is no longer as freaked out as he was when he first found it, but it still gives him pause.

Its like looking at your own gravestone, he said. Ive probably seen it hundreds of times now because out-of-town visitors still want to go see my name on The Wall, but it doesnt make me feel the way it first did.

As a young man just out of high school in suburban Philadelphia, Toney was working at a mall selling womens shoes. I had no idea what I wanted to do except date girls, he said.

Enter, the U. S. Army. He joined, went to Ranger School and then to Vietnam.

I was 20 years old and it certainly wasnt what I was expecting, Toney said. The young guys were smoking marijuana and drinking beer, and the inmates were generally running the institution. I decided that my survival required me to pick a small group of people that I could trust and stop dealing with the majority of those in charge.

So, he volunteered for a small sniper unit and then for an equally small reconnaissance unit of Echo Company of the First, 327th, of the 101st Air Borne.

He was on a reconnaissance mission on Oct. 9, 1970, when he stepped on a land mine. The Army listed him as Killed in Action because of his traumatic injury, but he was not dead. He lost both legs but survived.

At home, he married the girl he had been dating before Vietnam and went to the University of Pennsylvania, where he studied marketing. After Penn, he went to work for the Navy as a civilian employee in contracting. He retired from the Navy in 2005 and is now working for Monterey Consultants, a Service Disabled Veteran-owned consulting firm that works with the Air Force Small Business Center.

We help companies that are owned by Service Disabled Veterans obtain contracts with the Air Force and with the Department of Defense in general, Toney said.

Toney does much more than that. He has volunteered his time at Walter Reed Army Hospital and with other veterans organizations, talking to amputees about reassimilating into society.

There is no one place for veterans to go to get information about their benefits and their options, Toney said. I try to encourage them to set their goals high so that they wont have to renegotiate later when they decide they really want to get a masters degree or a Ph.D.

Vietnams legacy
Since Vietnam, Toney has spent his time raising three daughters with his wife and volunteering for various organizations in Alexandria. He served as a member of the Alexandria Commission for Persons with Disabilities, was on the board of directors of St. Collettas School for Retarded and Autistic children, is a member of the Knights of Columbus, was on the Parish Council at Blessed Sacrament, and coached basketball for more than a decade in both the Catholic Youth Organization leagues and with the Alexandria Recreation Department.

I have moved on but I am still very involved with a number of veterans organizations, Toney said.

This past Saturday night, for instance, he attended the annual DMZ to Delta Dance, sponsored by the Arlington Chapter of Vietnam Veterans of America.

There were about 150 people there and everyone had a great time, from vets and their wives to the children and grandchildren of Vietnam veterans, Toney said.

When he thinks about Vietnam, I remember getting on a helicopter or heading out into the jungle, Toney said. I also remember the people who served with me.