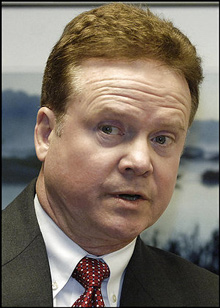 The spotlight was again on Virginia Senator Jim Webb (D) this week as his amendment that would establish a minimum period of time between troop deployments gathered momentum among Democrats this week but was faced with threats of a filibuster from Republicans.

Webb’s proposal would amend the National Defense Authorization Act to require that for ever year military personnel are deployed they are granted one year of “dwell time,” meaning time spent at home. It also sets a ratio of one year of deployment to three years dwell time for National Guard and Reserve units.

“We’ve reached the point where we can no longer allow the ever-changing nature of this Administration’s operational policies to drive the way our troops are being deployed,” Webb said in a press conference Monday. “In fact, the reverse is true. The availability of our troops should be the main determinant of how ground operations should be conducted.”

Shortened periods of time between deployments have led to rising mental health problems among soldiers, Webb reasoned. Additionally, the military has seen falling retention rates–more soldiers are serving the minimal number of tours required of them and not returning for additional deployments. This inevitably leads to a more inexperienced military fighting the war in Iraq.

The amendment sets a goal two years of dwell time per one year deployed. It also states that deployments should not last more than one year.

“This is one area where we all as Democrats and Republicans should be able to come together,” Webb added. “I would urge my colleagues to recognize this common interest and the interests that we share in addressing the welfare of our troops and their families.”

Webb’s Democratic colleagues have heard his call. As of Tuesday, 32 senators have signed on as original cosponsors. However, only one Republican senator is backing the bill so far: Iraq War critic Senator Chuck Hagel (NE).

“Senator Webb has taken an important leadership role on an issue that is as important to our country and to our military and their families as any other issue,” Sen. Hagel said on the Senate floor Monday. “It is the men and women who we ask to fight and die for this country who must always be our highest priority. The men and women who serve this country in uniform and their families deserve a policy worthy of their sacrifices.”

Webb, who supports mandating the beginning of withdrawing troops from Iraq but opposes setting a final deadline for complete withdraw, said Tuesday that he believes Americans want to see “something concrete done” and that his amendment seeks to restore “sanity in our deployment policies.”

The senator also expressed his dissatisfaction with Republican threats to filibuster the measure on Tuesday. Sen. Lindsey Graham (R-SC) plans to introduce an alternative amendment and Republicans are insisting both amendments be considered and voted on. This could make getting the 60 votes necessary for passage of Webb’s amendment increasingly difficult.

Moran signs on to impeach Cheney
Alexandria Rep. Jim Moran (D-8) signed on as a cosponsor of Rep. Dennis Kucinich’s (D-OH) articles of impeachment against Vice President Dick Cheney this week. Moran is one of fourteen members that support the impeachment legislation, H.Res. 333.

When Kucinich, a long-shot presidential candidate, introduced the bill on April 24 many in Congress and most media outlets scoffed at it. Since then, however, the bill has steadily picked up cosponsors, causing many to give it a second look.

“To me it’s about the constitution, it’s not about the personality,” Kucinich said Monday on MSNBC. “And the constitution requires the highest office holders to have the highest standards and obedience to the law, and I think serious questions have been raised, which is why I introduced the resolution.”