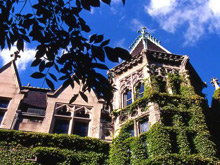 ‘Tis the season when Alexandria high school seniors dread the coming of the mailman, for he or she carries with them the results of the students’ supplications to attend an institution of higher learning.

I don’t know if this is still the case, but in my day a thin envelope meant, “Don’t darken our door, Bonehead.” A thick envelope meant, “Welcome, Pilgrim. Search for truth within our ivy-covered walls and please fill out the enclosed forms.”

For those who may have come in late, let me review my scholastic career:

In the mid-60’s, graduated from high school in New Jersey in the normal amount of time (assuming you don’t count the hours and hours spent in detention for one infraction or another);

Applied to all the usual colleges; got rejected by all but two – Marietta College, Marietta, Ohio 45750 – where I was accepted on the waiting list, and Parson’s College in Fairfield, Iowa which accepted anyone who applied – sort of like the United States Army at the time;

Went to Marietta College, Marietta, Ohio 45750 where I lasted exactly three semesters before I was tossed out by the black-hooded, stone-hearted Committee on Academic Standing which took the unbelievably narrow view that three “F’s” a “C” and a “B” in the first semester of my sophomore year did not “demonstrate progress toward a degree;”

Thus, do I find myself in Cambridge, Massachusetts preparing to speak to the students of Harvard who couldn’t get into Parsons College if they tried (because it went out of business and reopened as Maharishi University where one might take a course titled “Levitation 113”).

The whole notion of every high school student going onto college was a post-World War II social convention. It was largely driven by the G.I. Bill – an extraordinary piece of legislation which provided funds for every soldier to get some kind of training – in many cases getting a high school diploma (which was by no means universal then), to vocational training, to a traditional four-year college degree.

The G.I. Bill did good for hundreds of thousands of returning soldiers, but it had the additional advantage of behaving like the traffic control lights on the entry ramp to a freeway.

By getting returning soldiers to spend months or years to gain an education, the G.I. Bill slowed their entrance into a workforce which had been dominated by older males and younger females who had done the work of manufacturing the war materiel for the men, now returning home, who had worn, eaten, driven, flown, sailed, or shot it.

When the World War II vets had kids, a college education became a wide-spread goal because – I suspect for many of them – a college grad was seen the civilian equivalent of an officer in the military; “A College Man” was at once a term of derision, and a wistful dream.

State university systems as well as private colleges have grown to the point where it is very difficult for a young man or woman who has worked hard in high school not to find a school which fits their abilities and their goals.