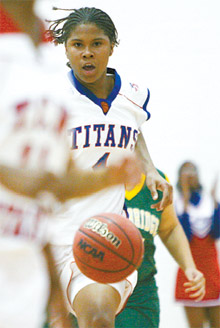 Its not unusual to see strangers sitting in the bleachers with clipboards on their laps watching and taking note of one of the most prolific basketball scorers in T.C. Williams history.

College recruiters and Division I college basketball coaches have scouted Tierra Ruffin-Pratt since she was in the eighth grade, and for this junior to rise to the heights shes reached has left fans, coaches and would-be suitors in awe.

So far this year, Tierra Ruffin-Pratt has broken the T.C. Williams High School girls basketball scoring record and scored 24 points in each of the Titans first three games. She is also ranked No. 1 in the nation for guards and No. 3 overall. And she still has another year to add to her impressive stats.

Tierra began playing basketball when she was 6 years old. I played at the recreation center with the boys on a U-8 team, she said.

She was good then, according to coaches and those who watched her play. And she has only gotten better, playing on the T.C. junior varsity team as an eighth-grader and earning a starting spot on the varsity team as a freshman. In the summer, she plays on national teams, traveling all over the country playing basketball and meeting new friends.

But she is only a junior and, I like to do regular kid stuff, like hang out with my friends and talk on the phone, the talented guard said.

College coaches have been watching her since eighth grade and continue to pass through the gym at T.C. to evaluate the All-American.

How does she deal with all the attention and know shes being evaluated as an All-American?

It directs positive attention to the team and school as well as myself, so I think its been beneficial to the team as a whole, she said.

So, after she graduates next year, Tierra will go on to star at some college or university, probably somewhere fairly close to home, according to friends. What will she study?

Im not too sure right now, but I enjoy the criminal justice class at T.C., so maybe Ill do something with that. I also like math, she said.

For now, though, she and her Titan teammates are focused on winning another Patriot District Title, bringing home a Northern Region Championship, and maybe even something bigger.