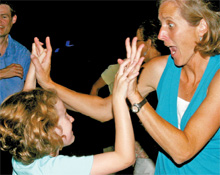 The Alexandria Symphony Orchestra was there and the Marines were there with their cannons for the playing of the 1812 Overture. The people were there, too, but Alexandria turned 258 years old without the traditional fireworks, which were cancelled at the last minute.

We tried to work things out but the members of the team could not agree on the fireworks set-up on the barge, said Steve Mason, a spokesperson for the City of Alexandria. It was going to take a lot of time to get everything cleared with the folks at Reagan National Airport and with the D.C. fire boats. For the safety of everyone involved, the Fire Marshal finally called off the fireworks display at around 4 p.m., and that was the right thing to do.

Even after the announcement, nearly 5,000 people stayed to enjoy the concert by the orchestra, led by Maestro Kim Kluge, and have a cupcake to celebrate the citys birthday.

We were very happy that so many people stayed and those who did had a terrific time, said Janet Barnett, deputy director of Parks, Recreation and Cultural Activities.

Awards
Each year, as part of the birthday celebration, the Parks and Recreation Commission recognizes individuals and organizations that have made significant contributions to the citys parks or to youth and/or adult recreational activities.

The citys birthday celebration is a great opportunity to give very public recognition to some of the many contributions of community-minded people living in Alexandria, said Judy Noritake, chair of the Parks Commission. With these awards we try to recognize the contributions of coaches, community gardeners, corporate sponsors and so much more. Our parks and recreational programs are great but they are all the richer for these gifts of caring citizens the gifts of time and talent.

The first award was given to an organization that has worked as a team with the city to improve quality of life. This years award went to the Old Town North Community Partnership, a group composed of residents and businesses in Old Town, for its work in improving Montgomery Park, located at 901 N. Royal Street. Through the Partnerships efforts, the park boasts a playground, improved landscaping and a sign box to distribute information.  The park is also the venue for summer concerts and the annual Taste of Old Town.

Brian Marquis volunteered his time to offer design and consulting services. Because of his efforts, visitors to the Holmes Run Greenway can enjoy the park with a clear understanding of the rules and regulations. He received one of the capital commissions civic awards.

In 1983, the Capital Commission presented Bill Clayton with a civic award. This year, he was recognized once again. Clayton is mostly known for his work at Beverley Park, but he is an active member of the Arts Forum and he helped raise funds for King Street Gardens.

Joe Shumard was recognized for his work on the citys George Washington birthday celebrations. He has served on the GW Birthday Celebration Committee since 1997, and is instrumental in managing the annual birthday parade as well as the number of other events offered including an educational symposium, a birth night ball, and a 10K run.

The Commission also recognized Trish Freeman for her work at Dora Kelly Park. She is an advocate of nature and is committed to keeping the park pristine. She has contributed countless volunteer hours and has assisted with park clean-ups, invasive plant removal and cleared storm debris.

Matthew Pewliski is a coach for the citys Little League. He coached the 2007 Shamrock Baseball Team which finished in second place. This coach is known for challenging his team, but also for his ability to teach good sportsmanship to encourage life lessons. He has given freely of his time, while taking away time from his own family each week to coach the team. Even though the season has ended, Coach Pewliski continues to volunteer by coaching the Alexandria Little League All-star players.