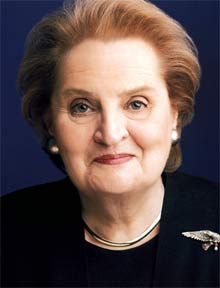 At the age of 54, she made history when she was sworn in as the first female Secretary of State. Now, at 70 years old, Madeleine Albright is still a dominant force in foreign policy and recently spoke with The Alexandria Times on her life in politics and the role of the media in the upcoming presidential election.

I absolutely had the best foreign policy job imaginable in public life, said Albright during a recent signing of her latest book Memo to the President Elect: How We Can Restore Americas Reputation and Leadership.

You dont get a second shot at something like that, said Albright when asked if she would ever return to public office. Except for Daniel Webster, and I dont begin to compare myself to him, she added with a laugh.

But the significance of being the highest ranking woman in the history of the United States government did not sink in right away for the political trailblazer.

The magnitude of it all really hit me when I was still UN Ambassador and on a train from Washington to New York, said Albright as she thought back to the day she was nominated in December of 1996.

It really hit me when I was on that train and at every stop, all the newspaper headlines, in some form, were about my appointment, recalled Albright. It was mind boggling and I guess thats when I knew history was being made.

When asked about the medias influence in politics today, Albright observed that the media isnt dumbing down the news as much as hyping it up. Everything is reduced to a screaming headline now, but policy is much more complicated than that.

She continued: With so many choices of information available, people tend to tune in to what they already agree with.

Not surprisingly, Albright herself prefers a different approach. Even though it makes me want to scream sometimes, I listen to Rush (Limbaugh), said Albright. I like to know what is being said and what the arguments are on the other side.

During her tenure as Secretary of State, Albright had a significant role in the formulation of US policy during the Kosovo War and was pleased to see the recent declaration of independence by the tiny Balkan nation.

Independence in Kosovo was the right thing to do, said Albright. People wanted this dream fulfilled and the international community had something to do in this.

It was slow in coming, she added, but independence is a process, not a single event.

Since retiring from public service, Albright has founded her own global strategy consulting firm and serves as chairman of both the National Democratic Institute for International Affairs as well as the Pew Global Attitudes Project.

She is also a Distinguished Professor of Diplomacy at the Georgetown University School of Foreign Service and is president of the Truman Scholarship Foundation.

I think its most rewarding when I hear teenage girls saying what a difference I have made in their lives, said Albright as she looked back on her inspiring career.

Ive been very fortunate and have absolutely no regrets in my public life.