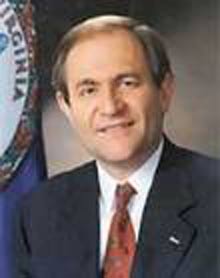 In a rancorous convention which resulted in a sharply-divided vote among conservative activists, Virginia Republicans nominated former Gov. Jim Gilmore of Richmond and Old Town to run for the seat of retiring Republican Sen. John W. Warner of Alexandria on Saturday.

Gilmore captured only 50.3 percent of the delegate’s votes over conservative Del. Bob Marshall, the General Assemblys biggest opponent of abortion and gay marriage. According to the AP, Marshalls boisterous, sign-waving supporters, many of them church-based social conservatives new to the ways of party maneuvering, packed the convention hall.

Gilmore’s tight margin leaves what some political analysts are calling a lopsided race against the popular, well-funded Democrat Mark Warner of Old Town in the fall election in a state where Republicans have ceded the past two contests for governor and the 2006 Senate election. In his acceptance speech, Gilmore attacked Warner as a tax-prone limousine liberal who will say anything to get elected.

Warner responded in kind Saturday. “When Jim Gilmore was governor, he showed he could not work with a legislature controlled by his own party on important issues like the budget, so it’s not surprising that members of his own party do not want to work with Jim Gilmore now,” said Warner’s spokesman Kevin Hall.  “That’s also why we’re seeing unprecedented Republican and independent support for Governor Warner’s honest and responsible record of leadership.”

Warner, already a strong favorite to be elected to the Senate this fall, has been telling associates that he is being considered as Barack Obama’s vice presidential running mate. Warner, however, is keeping mum as to whether he would be receptive to such an offer.

Removing Warner from the campaign for John Warner’s seat might create problems for the state’s Democratic leadership, which has no substitute Democratic candidate at hand.

Although no Democratic presidential nominee has carried Virginia since Lyndon B. Johnson in 1964, satte and national Democrats see the state as being in play for the 2008 election and would like to see a Virginian on the national ticket. Both current Gov. Tim Kaine and freshman Sen. Jim Webb have been mentioned as Obama running mates, but neither has Warner’s national name recognition.

“This is a myth that Mark Warner continues to promulgate and it is time to set the record straight,” responded Ana Gamonal, Gilmore’s communications director. “When Mark Warner took office as governor he not only inherited a balanced budget but he inherited a fully funded $1 billion Rainy Day Fund, the largest cash reserve in Virginias history, which under former Governor Jim Gilmore was the key component in preserving the states pristine credit rating (AAA) during tough post 9/11 economic times.”

Gamonal, in a statement to The Alexandria Times, said that, “Even with no growth in revenues because of a slowing national economy, in fiscal year 2001, guided by his fiscally conservative principles, Gov. Gilmore not only cut spending and balanced the budget, he left office with a record $1 billion in Virginias state savings account, the Rainy Day Fund. Gov. Gilmore deposited more into that account than any other governor in Virginia history.”

Warner’s ad features positive comments from one of the state’s most prominent Republicans, former Senator John H. Chichester, the Virginia Senate president and chairman of its budget-writing Finance Committee until his retirement this year after 30 years in the General Assembly. Chichester served in the Virginia Senate during the administrations of nine Virginia governors.  “This initial positive ad spells-out Governor Warner’s track record in bringing all kinds of people together to find bipartisan, common-sense solutions, and that is the same approach he will take to the U.S. Senate,” campaign manager Mike Henry said.

Henry said the campaign intends to strike a positive tone in its ads. The 60-second message includes comments from two prominent Virginia business leaders: Ben Davenport of Danville, a prominent Southside Virginia business leader who was chairman of the Virginia Chamber of Commerce, and Paula Gulak of Richmond, former chair of the Richmond Technology Council. It also includes comments from Sheriff Don Farley, an Independent who serves as the elected sheriff of Rockingham County and the City of Harrisonburg.

The ad references some of the themes from Warner’s campagn stump speeches, including Virginia’s 2005 designation as the “best managed state in the nation” by Governing magazine, and TIME Magazine’s selection of  Warner as one of “America’s Five Best Governors” in 2005.

“Our message reinforces Governor Warner’s proven style of leadership, and reminds everyone of the honest and responsible way he addressed the serious fiscal challenges facing Virginia when he was sworn-in as governor in 2002,” Hall said.

Warner’s ad can be viewed at http://www.markwarner2008.com/initialad.