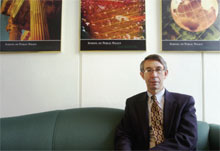 Despite worries about the nations economy feeling a snowstorm, economic data shows the local Alexandria economy only feels a chill.

This week the Alexandria Economic Development Partnership (AEDP) released 2007 third-quarter data showing new data for employment and commercial real estate. Since 1981, AEDP has been compiling quarterly analyses of the economic strength of the city as a service to the business community.  The key data provides information on the health of the citys economy for new, relocating and expanding businesses.

Everything is pretty much steady, said Christy Blake of the AEDP.

Steven Fuller, Ph.D, director of the Center for Regional Analysis at George Mason Universitys School of Public Policy, first moved to Old Town in 1967 and remembers when the train used to carry foul-smelling animal carcasses through Union Street.  He later left Old Town, and has moved back recently to see the citys growth first-hand.

Fuller predicted that Alexandria will grow more slowly in 2008 but has unique niche markets that have avoided the extremes.  The slower growth, he said, was tied to the troubles in the housing market.  The indicator report listed 1,072 total housing units sold in September 2007, compared to 2,001 housing units sold in June 2007.  Fuller said though most people hear about the crisis in the sub-prime mortgage market, those hurting in Alexandria are the moderate income households with incomes between $25,0000 and $40,000, with children and no savings.

The sales are slower, and the prices are moderating, but the important part is the construction, Fuller said. The residential sector has grown at half the pace of 2004.  That costs jobs.

The new data on employment in the report reflects an influx of staff relocating to the United States Patent and Trademark Office on the West End, Blake said.

The Alexandria economy does not grow as fast in the good times, but does not hurt as much in the bad times either, Fuller said. The city is protected by a modest growth base driven by federal functions, tourism, and more double income earners than other areas. Alexandria feels a chill and not the tempest, Fuller said.

The office market is another active sector in the Alexandria economy.  Blake said the only notable change occurred in the office market was a decrease in vacancy rate from 12.2 percent in the first quarter of 2007 to 6.4 percent in the third quarter of 2007.  The drop is attributed to the renovation and removal of active inventory at Victory Center, located in the citys Eisenhower Valley.

Growing vacancies have appeared in retail spaces along King Street.  Retail sales totaled $608 million in the third quarter of 2007, down about $20 million from the same quarter of the previous year.

ArtCraft, despite unfounded rumors of closing, is staying put after more than twenty years.  One of the reasons were continuing to operate is because the Alexandria market has potential for business to come back, Adam Winer, the longtime owner of ArtCraft, said.  Were not immune from trying to increase business, though.  It hasnt been as good as it used to in prior years.

Additional copies of the complete report may be obtained from the AEDP offices at (703) 739-3820 or at www.alexecon.org.