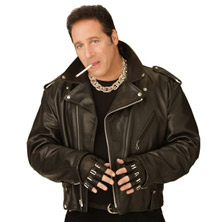 We all know how much the world has changed in the last 20 years.

For example, the only telephones back then were wired to a wall; today, you cant go two feet without seeing someone yapping away on a cell phone from their car or the street.

So how does someone like the one and only Andrew Dice Clay, the terrifically raunchy standup comedian who exploded on the scene in the late 80’s with his sexually-explicit act, make things relevant for todays audiences?

Well for one, hes bagged the vulgar nursery rhymes that crowds used to recite along with him (remember what he said he did to Mother Goose?) and has rewired his irreverent, profanity-laced material with more modern topics like…well…cell phones.

“Im delivering fresh, current material, and they seem to be going even more crazy than they did before, mainly because its so truthful and so real”, Dice told me on the phone from LA two weeks before his April 4 show at DCs Warner Theater. “Like what technology like cell phones has done to people. The way I think of it is, Hey aole, this is valuable breathing time, and THIS is what youre busy doing? “

After years of filling arenas with rabid fans, the Brooklyn-born “Diceman” veered in and out of the spotlight over the last dozen or so years, starring in a failed CBS comedy, a vapid VH1 reality show, a slew of innocuous films, and seemingly always trying to jump start his fame of old.

But by all means dont tell him that hes on the brink of another “comeback.”

“Ive been working all these years, its not like I stopped working. Its just that all of a sudden it seems like the public is almost demanding that I come back. And the audiences have been responding like they did back then, and thats what excites me. Its like lightning striking twice. I mean, they even rushed the stage in Canada recently!”

Lightning recently struck Dice in the form of an appearance at a low-end awards show that went from a simple presenting slot into an impromptu ten-minute obscenity-laced routine that stunningly reminded people how truly disgusting, and sure, how hilarious Dice was, and still can be. Gone was the trademark leather jacket and studs; its silk suits and pinstripes now, but with that same old Dice edge.

“They booked me on the show and we get a call saying Im not allowed to perform, only the hosts (the Smothers Brothers, by the way) can perform. So Im backstage and I tell my manager, I dont know what Im gonna do when I get out there. So I get up to the mike, and I say to myself, “Just let em fing have it.” He let em have it and then some, and enough people laughed that backstage afterwards, industry execs sought out the 50 year-old comedian to shake hands and talk deals.

About the unexpected “gig” that may have given Dice a renewed lease on his storied yet erratic career, Dice puts aside his never-ending self-promotion and bravado, and says humbly, “Its one thing to go out and fail…but its another thing not to try.”