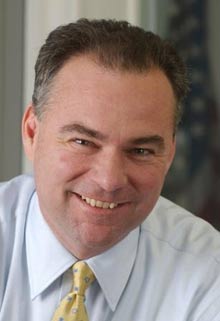 Coming off the 2007 election in which the majority party in the state Senate switched and many committee chairs changed, Governor Tim Kaine (D) remains confident as he launches into this years legislative session with an ambitious agenda.

Its going to be an interesting session with the election results, Kaine said in a conference call with reporters last week. There are a lot of new relationships, he added, that he expects will take a month or two to get sorted out.

Nevertheless, the governor remains optimistic that he can accomplish the following goals for the session.

Mental Health
Mental healthcare is the largest issue in the aftermath of Virginia Tech for this legislative session, Kaine said. He expects bipartisan support for community based mental health services and allocated large amounts of money for those programs in his budget.

The governor based most of his budget on the findings of the Virginia Tech Review Panel late last year. Expanding Virginias emergency response services was one of the panels most imperative recommendations.

The budget will include over $40 million to hire new case managers, therapists, and clinicians and will expand emergency services. That money will also go towards improving accountability.

Through the development of service standards across the community services boards, we will move toward a more uniform system of emergency response times, service admission criteria, staff credentialing and training requirements, and of mandatory activities, like attending temporary detention order hearings, the governor said in a statement when he released his budget.

Kaines budget allots vast sums of money towards this end. Specifically, over 14 and a half million dollars are proposed to fund emergency mental services, including 24-hour psychiatric consultation, clinicians and crisis stabilization. Forty new clinicians for outpatient services will by funded by nearly five million dollars. Nearly six million will fund 40 new clinicians who specialize in childrens mental health for kids who do not qualify for services in through the Comprehensive Services Act.

Despite its status as one of the wealthiest states, Virginia has a high infant mortality rate, the governor said in a statement. By providing more women with access to prenatal care services earlier on in their pregnancy, I am hopeful that we can begin to decrease the number of infant deaths in the Commonwealth.

The budget also provides funds for free breast and cervical cancer screenings for uninsured women. If passed, it would expand the Virginia Breast and Cervical Cancer Early Detection Program to provide free screenings to over 1,000 uninsured women, ages 18 to 44.

Lastly, Kaine plans to expand and strengthen Virginias safety net for the uninsured. He hopes to do this through the creation of the VirginiaShare program. The program would provide insurance for small business workers earning twice what the federal government deems the poverty line or less.

One in seven Virginians still lack health insurance because their employers dont provide it or because they cannot afford it, Kaine said in a statement. As more citizens rely on our health care safety net for their most basic health needs, we must strengthen that system.

In VirginiaShare, the state would cover one third of the premium costs, up to $75, and the employer and employee would be responsible for the other two thirds.

Kaine expects 5,000 Virginians will gain health insurance through this program.

Child Services
Kaine is focusing much of his budget on childhood services and, in particular, foster care. These services, he said in a conference call, will prepare kids for a more likely path to success.

A review by the Annie E. Casey foundation in conjunction with First Lady Anne Holton found that Virginia relies to heavily on group homes instead of foster families. Virginia has the highest percentage of children in the country aging out of foster care with no permanent family ties because of the lack of foster parents.

Virginia doesnt do enough to recruit and retain foster parents, the governor said, and his budget reflects an increased effort in that area. Currently, Virginia pays foster families 60 percent less than the amount considered minimally sufficient to raise a child from birth to age 11. The governors budget, based on the First Ladys For Keeps initiative, would increase the amount paid to foster parents by 26 percent. It would provide over $36 million in state and matching funds for basic foster care and over $9 million in state and federal matching funds to recruit and retain foster parents.

Education
With the national economy heading towards what many expect will be a recession, Kaine stressed his $1.65 billion bond package for higher education included in his budget.

Virginia is in a relatively well off position, the governor said discussing current national economic trends. That kind of place is very important in the international competition were in. We cant afford to stand still on the education investments.

The bonds will be used for workforce development, retaining students, research and providing facilities for areas in need such as education, engineering, nursing, business and the sciences.

The governor noted that the bonds would better prepare Virginia students and workers to compete in a global economy. Education, the governor said, is matched with the economic strength of [a] community.

The best way to grow the economy is to grow brain power, he added.

If the legislation passes the proposed bond package, the measure would be put on the 2008 ballot as a voter referendum. If it succeeds there, the money will begin to be dispersed in January 2009.

The governors budget also includes over a $9 million increase in student financial aid.

The scientific evidence about the health risks associated with exposure to secondhand smoke is clear and convincing, Kaine said in a statement earlier this month. Recognizing the negative health effects and high public costs of secondhand smoke, Virginia must act to protect the workers and consumers in its restaurants.

Kaine also cited a Virginia Department of Health statistic that estimates 1,700 deaths per year are caused by second hand smoke. As such, in 2006 he signed Executive Order 41 banning smoking in all state buildings and vehicles.