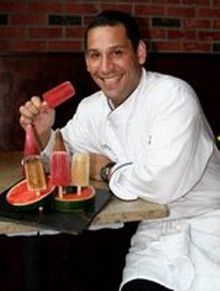 RICHMOND — Virginia’s bars and restaurants, including Rustico in Old Town, would be free to serve beer popsicles and similar alcohol-spiked foods, if House Bill 1075 passes.

The bill, sponsored by Delegate Terrie L. Suit, R-Virginia Beach, states that the Virginia Department of Alcoholic Beverage Control cannot prohibit the sale of food products containing alcohol, as long as those products are being sold to people over the age of 21.

The issue surrounding the bill originated after the VABC tried to prohibit the sale of beer popsicles at Rustico at Potomac Greens. The hop-sicles, as some called them, generated widespread discussion, prompting videos on how to make the popsicles to be posted on the Internet.

The VABC attempted to prohibit the sale of alcoholic foods because it violated current laws, which stated that alcohol must be served in its original container or be poured from a tap.

After the buzz, the VABC has yet to take a stance on the bill.

We dont have a position on it, said Curtis Coleburn, secretary of board members at the VABC.

The topic of beer popsicles did not generate as much hype in the General Assembly as it did online, said Delegate Adam P. Ebbin, D-Arlington, a co-sponsor of the bill.

It didnt come up in detail, Ebbin said.

Supporters of the bill worry that a law outlawing beer pops would ban other popular food items such as tiramisu or rum balls.

The bill is here to make it possible to serve desserts with alcohol in them, Ebbin said.

The bill was skipped over Friday during an early morning meeting of the Senate Committee on Rehabilitation and Social Services.

Sandy Richards, a legislative aide who spoke on behalf of Suit, said, That means that there are things that probably need to be straightened out.