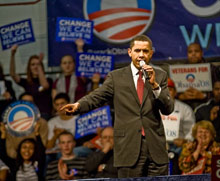 They must have been listening.

The 4,200 Alexandrians who braved freezing temperatures Sunday to wait in line at TC Williams High School to hear Barack Obama bring his message of change and hope to Alexandria must have taken his message to heart, bringing friends and neighbors with them to the polls Tuesday.

By the end of the day, the city’s Registrar had reported a stunning victory by the Illinois senator, who carried all 27 of Alexandria’s precincts in the Democratic Primary, winning the city by a 30 percent margin over presidential hopeful Hillary Clinton. Arizona Republican John McCain did even better, besting his opponent Mike Huckabee by a 53 percent margin, also carrying every one of the city’s precincts in the Republican Primary.

In Alexandria, Obama picked up 17,028 votes, or 64.5 percent of the vote, while Clinton tallied up 9,269 votes, or 34.74 percent. Each of the other Democrats won less than a half a percent apiece: John Edwards (101 votes), Dennis J. Kucinich (48 votes), Bill Richardson (29 votes) and Joe Biden (24 votes) had long since dropped out of the running before Tuesday’s elections.

Given the freezing rain which coated some of the city’s streets with a black sheen of ice, turnout was not bad among the Democrats. About 32 percent of the city’s active voters participated in the Democratic primary, or 26,679 voters out of 82,714 registered, according to the city’s Registrar of Voters, Tom Parsons.

On the Republican side, turnout was dismal, with only 8 percent of the city’s registered voters even bothering to go to the polls Tuesday. For McCain, a 1954 graduate of Episcopal High School, 4,673 voters cast ballots for him (69.84 percent), with 1,098 voters pulling the lever for former Arkansas Governor Mike Huckabee (16.41 percent).

“Sen. Obama has shown a remarkable ability to inspire people and make us believe that we really can be a better America,” said Democratic Party of Virginia Chairman C. Richard Cranwell, who congratulated Obama on his win. “And that is why he was so successful in getting so many people here in Virginia out to vote.”