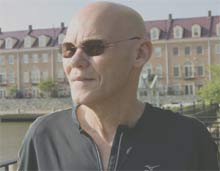 James Carville and Mary Matalan, the quintessential Old Towners known to the rest of humanity as the world’s most famous political odd couple, have decided to remain here and take their $4.5 million listed home at Ford’s Landing off the market, Carville told The Alexandria   Times Tuesday.

In late March, Matalan told The Washington Post that when she and Carville got married that she always expected that they would eventually end up back in Louisiana, where the square-jawed Marine has extended family and where he got his start as a political consultant. “It’s the Holy Land,” she told The Post. “The old Jew is taking me home.”

But during what has become one of the most exciting presidential elections ever, the political power couple has apparently had second thoughts.  With the occasional fireworks show at National Harbor on view out their front window, a slew of trendy new restaurants opened in Old Town and Carville’s beloved Jones Point Park being improved for his early morning jogs,  “We’re putting our plans on hold,” Carville said.

“Old Town is happening like crazy,” he says effusively, in his trademark gumbo drawl. “Look at how much it’s changed since Mary and I moved here in 1999…All sorts of new shops and restaurants opening up and terrific schools…I like having a sense of place, and if you’re in Old Town, it is its own place. And still, you’re 15 minutes from the airport and 100 miles from Washington in a cultural sense. As long as I can afford it, I’ll stay here.”

Carville, 64, who makes his living as a sought-after speaker, political consultant, commentator, actor, media personality and pundit, first gained notoriety in 1991 for taking on a then little-known southern governor and helping him beat down a 90 percent approval rating of then-President George H.W. Bush. As the lead strategist of Bill Clinton’s 1992 victory over Bush, Carville helped orchestrate a stunning upset of a sitting American president.

After his 1993 marriage in New   Orleans to Matalan, the lead strategist of the campaign he helped to defeat, Carville became co-host of CNN’s Crossfire until its final broadcast in June 2005. Since its cancellation, he has appeared on CNN’s news program, The Situation Room, and since 2006 has hosted a weekly program on XM Satellite Radio called 60/20 Sports with Luke Russert, son of NBC’s Tim Russert.

The oldest of eight children, Carville was raised in Donaldson, LA. the son of a former school teacher who sold World Book Encyclopedias door-to-door, and Chester James Carville (his namesake), a postmaster and owner of a general store. Before politics, Carville served two years in the Marines and was a litigator at a Baton Rouge law firm. He also worked as a high school teacher.

Carville, who was born with Irish and Cajun ancestry, owns a second home in New Orleans with Matalan, near the campus of Tulane University and where he and Matalan will deliver a joint commencement speech this spring. The house sits on the same block as one of Carville’s cousins.

In March they hired McEnearney Associates to sell the five-bedroom home they bought three years ago for $3.9 million along the Potomac, but have now decided, as Carville put it, to carry “dual visas.”

“This is an exciting place to live,” he said. “I feel like I live in a community. If you live in Bethesda, it’s like you still live in Washington, D.C. People go out, but it’s not Washington. This place has its own identity…Sure, people know me here, but they leave me alone.”

Well, maybe not everyone.

Tourists often swarm over Carville at the Saturday morning Farmer’s Market, and at his favorite watering holes, which he says are Landini Brothers, Bookbinders, O’Connells and Jackson 20, he’ll run into the occasional autograph-seeker, which he says is okay. “You can always tell the tourists,” he chuckles.

Matty, their eldest daughter attends the Del Ray independent college prep school serving 100 middle and high school students who have ADHD, ADD, or specific learning differences.  “They’ve done wonders with her and some of the attention problems her dad has,” Carville said. “I’m very proud of Matty. She’s a straight A student who’s been two years on the Honor Roll.”

Commonwealth also serves students who benefit from the small class sizes and individualized plans that are hallmarks of the school’s specialized, hands-on education.

Led by Head of School Susan J. Johnson, PhD, Commonwealth is recognized for its innovative use of technology across the curriculum.  “Dr. Johnson is one of the most remarkable people I’ve ever met,” Carville said. “It’s a really inspiring place.”

Carville said he will also continue to be inspired by Old Town, his early morning runs through Dyke Marsh and Jones Point Park, and by some of the lifelong bonds he and his family have made here. “Where else can you find a Federally-protected wetland so close to where you live?” he said. And so close to the action in the nation’s capital, where he’s made a cottage industry out of being James Carville.

With that, Carville’s driver whisks him off to the airport, and another grueling schedule of speeches and punditry on the road, which of course allow him to live “in such a special place.”

About Alexandria: The development test