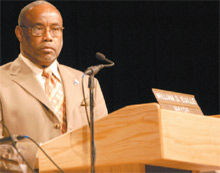 Mayor William D. Euille presented his annual State of the City address March 26 at TC Williams High School, highlighting the citys current conditions and future goals. A healthy crowd of citizens joined city and state officials in the schools new auditorium, where the topics ranged from a lack of public restrooms to the citys economic landscape.

Mayor Euille and City Council members championed development as a means of economic growth and addressed transportation problems in a video presentation themed opportunity and challenges.

Other issues touched upon were youth development and environmental sustainability an environmental charter is being developed and a summit is planned for May 10 which officials said are top priorities.

As the video ended and council members took the stage for questions, the address turned into a public hearing of sorts, as citizens spoke about issues concerning them, many revolving around the West End: its future development and what some citizens said is a neglected area of the city.

I also live on the neglected end, I mean the West end of Alexandria, one man addressed the council. He complained that his trash can is so old, it still has a Nixon sticker on it and indicated that the trash service in the West End is lacking.
How many street sweepers do we have, and is the West End included in the schedule for sweeping? asked West End resident Ethel Underwood. Underwood said she was referring to the entire area, but the Holmes Run and Van Dorn areas in particular.

Euille, who embraced the West Ends inclusion during his 2003 mayoral campaign, said the city intend to ensure that all neighborhoods are cared for, not just Old Town and other East Side neighborhoods. He indicated that Landmark malls redevelopment was supposed to catalyze the process, but the timetable has been slowed by negotiations, despite the citys planning, which has moved forward. Nevertheless, Its high on our radar screen, Euille said.

Speaking as a citizen, school board member and Cameron Station resident Blanche Maness also expressed concern for the areas cleanliness, but worried more about what she said is a shortage of recreation centers in the area south of Duke St. and west of Van Dorn St.

We have thousands of children there, Maness said. We know we have William Ramsey and Patrick Henry but they are not in proximity for easy walking, bicycling for our children.

There are 3,721 students attending West End schools in addition to 2,794 students at Minnie Howard and TC Williams, according to the Alexandria City Public Schools Web site. Many of those students live on the West End, which has seen ample repopulation in the last five years.

We are anxiously wanting the landmark mall redeveloped so that our city will be more balanced east and west ends. Maness said. We do not want to think that you are not attending to us.

Councilman Justin Wilson noted that an array of infrastructure traffic, recreation and even school-related would benefit from the areas redevelopment, Landmark Mall in particular.

For a long time there hasnt been a very loud voice in the West End, Wilson said. Much of the West Ends housing is condominiums and apartments, which are transient in nature and therefore may hinder participation in local government, according to Wilson. But the reality is, here we are, how do we move forward?

Wilson said that once the Landmark/Van Dorn Area Plan materializes, it will be the citys primary economic engine for the next two decades. He noted that West End residents have welcomed the development as a means positive growth.

When youre in an elected role, you advocate for everybody, Maness said over the phone Monday. She suggested to council that developer money from the Landmark and Van Dorn projects be allocated to build recreation centers for children, but also for adults who would have an assembly space for public hearings and forums.

Mayor Euille, who has been actively pursuing the project, noted that he raised the idea with General Growth, the developer and majority owner of Landmark Mall.

Vice Mayor Del Pepper said that the Department of Recreation, Parks and Cultural Activities would like to begin a feasibility study identifying exactly what the need is, exactly who would be using [the recreation center] and exactly where would be the best spot to put it.

Councilman Rob Krupicka added that allocating a spot in the capital budget to a recreation center is also a possibility, though locating the funds would likely be an issue.