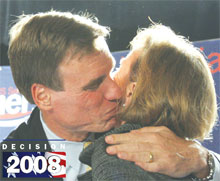 President-elect Barack Obama, Senator-elect Mark Warner (D Va.) and Rep. Jim Moran (D – 8) did not miss a beat in Alexandria November 4. Each Democratic candidate won each of the citys 27 precincts, the closest races coming out of the City Hall district and the Ladrey Senior Building on Wythe Street.

Outside of the citys epicenter the disparities grew larger between the Republican and Democratic contenders for every office up for grabs (except for Moran, who simply held on to his incumbent post for a 10th term). As a result, the Commonwealth is no longer red, no longer purple, but a solid blue.

The closest margin of victory for Obama was by about 12 percent, about nine percent for Moran and about 39 percent for Warner, whos race against former Governor Jim Gilmore (R) seemed decided months ago.

I think our record margin tonight shows that Virginians and Americans want a senator whos going to go to Washington, find common ground and get stuff done, Warner said before his victory speech in McLean. Im proud of the fact that we have had such across-the-board support from rural Virginia to our cities to suburban communities in between.

The statistic repeated ad nauseam, that Virginia has not elected a Democratic president since Lyndon Johnson in 1964, is a significant one. But not since 1970 have both Senators from the Old Dominion been Democrats and, though it was never a close race between Warner and his opponent Jim Gilmore (R), a sea change has occurred in what many are calling the New Dominion.