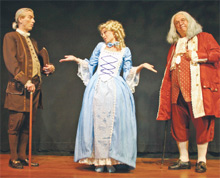 In a landmark Presidential election year, there is no better way for The Little Theatre of Alexandria to open its 75th anniversary season than with a rousing revival of the patriotic, award-winning musical 1776.

Set in the early summer of 1776, the Pulitzer Prize-winning play provides theatergoers with an intimate look at the events, including the discord and heated debate, that led to the signing of the Declaration of Independence and the creation of a new nation.

Based on the book by Peter Stone with music and lyrics by Sherman Edwards, 1776 debuted on Broadway in March of 1969, winning three Tony Awards, including Best Musical over such blockbusters as Hair, Promises, Promises and Zorba.

In this theatrical extravaganza, representatives of the original thirteen colonies have convened the Second Continental Congress in Philadelphia as a frustrated John Adams vigorously leads the fight for independence from England.

Under the superb direction of Frank D. Shutts, II, the LTA production is a visual masterpiece, a kaleidoscope of colors and sounds that dazzles the senses from the opening strains of Sit Down, John to the final tolling of the Liberty Bell as John Hancock leads the founding fathers in signing Thomas Jeffersons historic document.

In a show of many highlights, it is the born-and-bred Alexandrian Mick Tinder that leads a stellar cast and awes the audience with his mesmerizing portrayal of John Adams.

Making his LTA debut, the immensely talented Tinder brings magic to what has become his signature role throughout the region, having brought Adams to life in nearly 200 performances.

I actually started as a first understudy and it has grown from there, said Tinder, who perfectly captures Adams Boston accent and old New England nuances.

Leading the fight against Adams are Hans Dettmar as the condescending man of property, John Dickinson of Pennsylvania, and Chris Gillespie as the fiery, bellowing Edward Rutledge of South Carolina.

Gillespie in particular has a strong, commanding presence on stage that crescendos in his show-stopping solo Molasses to Rum.

Andrea Klores plays Abigail Adams and tenderly renders duets with Tinder in which large portions of the lyrics are taken from the actual letters between the future president and first lady.

Liz Sabin makes a brief but memorable appearance as Martha Jefferson, the role created by the then-unknown Betty Buckley in her Broadway debut in 1969.

The entire score is a diverse selection of compositions by Edwards, from the toe-tapping and playful The Lees of Old Virginia to the whimsical He Plays the Violin and the somber and poignant Momma Look Sharp, chillingly sung by A.J. Pendol as the courier.

Perfectly punctuating the dialogue and score is the stellar 17-piece LTA orchestra under the expert direction of Christopher A. Tomasino.

The glorious period sets by Myke Taister received their own ovation as the opening curtains parted. They are the perfect companion to the colorful and elaborate costumes of waistcoats, breeches and silk stockings by Jean Schlichting and Kit Sibley.

The multiple-award winning team of Ken and Patti Crowley once again creates lighting magic to direct the eye between scenes and capture the ambiance of the sweltering Philadelphia summer.

Produced by Carolyn Winters, Rance Willis and Sharon Field, the theatrical spectacle leaves no doubt as to why LTA has been nominated over 200 times for Washington Area Theatre Community Honors Awards, with 37 wins since the WATCH awards began in 2000.

There is nothing not to like about this production, and the entire ensemble deserves accolades for their inspiring performances. With the incomparable Tinder as Adams, 1776 is a must-see for audiences of all ages.