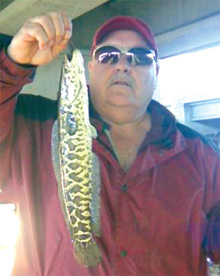 During the week the lifelong Alexandria resident drives an 18-wheeler straight truck, delivering plumbing supplies, pipes, toilets and tubs to Home Depot customers in the area.

But at the crack of dawn on Saturday and Sunday mornings, you can find the 52-year old weekend warrior planted on the side of the Potomac River, where he spends hours casting a line from his wobbly fishing pole into the murky waters. Hes been doing this for 25 years, he claims, his eyes lighting with passion. If the fish are biting, Ill fish some more, he says.

At 7 a.m. on a recent Sunday, Crockett squeezed his lithe frame past the fence that separated his parking spot at Hunting Towers from the anglers holy land, a concrete platform above a sanitation discharge in front of the Woodrow Wilson Bridge. Ive been fishing this same spot of the river for 25 years, he said, as his line pulls from the weight of a largemouth bass. The fish love it here because there are so many nutrients in the water.

Crockett, not to be confused with the celebrated American frontiersman and American folk hero, Colonel David Crockett, the King of the Wild Frontier, who died at the Battle of the Alamo in 1836, lives in the West End, a delivery truck driver and weekend fisherman extraordinaire, invites the comparison with his description of the quest for the Frankenfish. Theyre like the new frontier for people who fish, he said. It has a funny, flat head with beady eyes. They have scales so bumpy theyre like prehistoric. Its just a wild fish.

The Frankenfish, more commonly known as snakehead, quickly became a vexing presence after their discovery in local waterways in 2002. They are an invasive species that can even survive on land for a few days if they remain moist.

Crockett caught his first snakehead, a six-pounder from the chilly waters of Dogue Creek, with a fancy Yamamoto lure last October. I went right into the water and grabbed it, he said. It was a good fightin fish. I wouldnt mind catching one every day. The meat is like a real good fillet.

Crockett claims he has caught four snakehead at Dogue Creek renamed Snakehead Creek by local anglers and pulls out his cell phone photo gallery as electronic proof. Its just loaded with em, he said. A Korean man I fish with catches them and eats them for dinner. Hes caught 300 or 400 of them.

Fish tale? Perhaps not. Two years ago, a local Bass Pro Shop was giving away $50 gift certificates for each snakehead brought in. It stopped the practice after the shop became inundated with fishermen hauling them in. At the time, the Fairfax County Department of Natural Resources at Fort Belvoir was taken aback by the immense number of the carnivorous fish it netted, weighed and tossed away.

But these days the woes of the Potomac fisherman are numerous. Whereas in years past, Crockett said he and his fishing buddies might catch 25 bass in a couple of hours. These days, there might not be a bite for hours.

The intense dredging on the Potomac and Wilson Bridge construction, he says wistfully, have chased many of the fish away. A lot of the best places wed fish are gone now, he said.

Another impediment to unfettered angling was a recent decision by the National Park Service disallowing fishing for catfish due to fears of causing ecological damage. Crockett just shakes his head. I love catfish, he said. They put up a great fight and make great grilling.

Crockett also tries his luck from time to time at Duck Pond, Roaches Run or the bird sanctuary across from National Airport. In the summertime theres so much heat coming from the pipes from the Pentagon discharge that it keeps the fish away, he said. So not much luck there, either.

But it wont keep Crockett away.