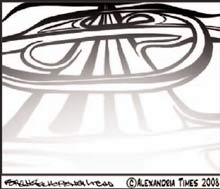 All lanes on I-95 North (the Capital Beltways Outer Loop) will be shifted to a new alignment from west of the Route 1 Interchange to the Wilson Bridge.

The traffic shift is necessary to allow continued progress on new Beltway lanes that ultimately will separate local and long-distance travelers. To implement this Outer Loop shift, crews must lay 3000 tons of asphalt to pave connections between the existing and new Beltway alignments.

Throughout the weekend of May 9-11, motorists should expect significant traffic impacts, beginning Friday, May 9 at 9:00 p.m. until the operation is complete on Sunday, May 11.  Planned lane/ramp closures are as follows:

Early Saturday Morning
Springfield Interchange Ramp from I-95 North to the Beltway Outer Loop (I-95/I-495 East) will close temporarily to divert traffic from traveling through the affected area.  All eastbound traffic will be forced to travel on the Beltways Inner Loop (I-95/I-495 West) across the American Legion Bridge.  Once traffic volumes lessen, the ramp will reopen.

Mid-day Saturday:
A second lane on the Outer Loop will reopen to traffic.  The two open lanes will be shifted to the new Beltway alignment, which is located approximately 65 feet to the south of the existing alignment on the roadway that has served as the exit ramp from the Outer Loop to Route 1.

Sunday:
Once all paving and striping work is complete, the third lane on the Outer Loop will reopen to traffic on the new Beltway alignment.  The Outer Loop Beltway shift will be complete, with all lanes in their new alignment.

New Wilson Bridge opening
The second new span of the Woodrow Wilson Bridge is scheduled to open to traffic the weekend of May 30.  The new bridge will carry the three lanes of I-95 South (Capital Beltways Inner Loop) traffic.

Additional commuter relief is expected by late fall, when additional lanes open on both Wilson Bridge spans, as well as on the mainline Beltway (from the MD 210 Interchange to Route 1 in Virginia) providing a total of five travel lanes in each direction.

The majority of traffic improvements on the new interchanges at Maryland 210 and I-295, and Route 1 in Virginia, are scheduled to be completed by late 2008, with finishing touches completed in 2009.

Go to www.wilsonbridge.com for the latest lane closures and project information.