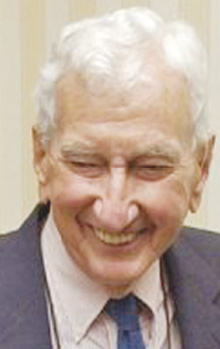 Joseph V. Gartlan Jr. was remembered Wednesday as a legislative giant by all who knew the veteran state senator, a towering liberal Democrat who served in Richmond from 1972 to 2000 before retiring to his riverfront home in Mason Neck.

Gartlan, 82, died at Inova Mount Vernon Hospital Friday, after a brief illness. The cause of death was a blood infection known as sepsis, said his daughter Joan Gartlan.

Gov. Tim Kaine called Gartlan a true statesman and ordered flags at the state Capitol on Friday to be flown at half staff in his honor. During his 28 years in Richmond, Gartlan shepherded thousands of bills through the General Assembly, most notably legislation which championed key environmental and social causes.

Joe was a selfless, tireless, committed and effective public servant who always had serving his constituents and working for the public good as his driving goals, said Glenda Booth, the president of Friends of Dyke Marsh. He was a leader in cleaning up the Chesapeake Bay and Potomac River, conserving our finite natural resources and expanding opportunity for all. He saw government as a tool for the good.  Every Northern Virginian benefits from his service.

On Wednesday, hundreds of longtime constituents, admirers and friends turned out at a funeral service at Good Shepherd Catholic Church on Mount Vernon Highway in Alexandria with burial at Mount Comfort Cemetery.

Gartlan served seven terms in the Senate and represented parts of Lee, Mount Vernon and Springfield in southeastern Fairfax. At one time or another Gartlan chaired three Senate committees Courts of Justice; Privileges and Elections; and Rehabilitation and Social Services. Second in seniority in the Senate, he served on the Finance and Rules committees and co-chaired the Northern Virginia delegation

When he announced he was retiring in 2000, his Senate colleagues rose to give him a four-minute standing ovation. He had a lot of common sense in a legislature where the dominant theme by ideology and intolerance, the Fairfax County Democratic Committee said in a statement. His wit, wisdom, and spirit will be dearly missed.

Gartlan was born in Great Neck, N.Y. After high school he served in the Navy during World War II.

In 1949, he graduated from Georgetown University, from which he received a law degree in 1952. Afterwards, he worked as an attorney in Washington for three decades until retiring in 1986 to focus on his work in Richmond. In 2003 worked to save INOVA Mount Vernon Hospital. A lifelong resident of Mason Neck, he was a member of Good Shepherd Catholic Church in Mount Vernon.